My next trip will be to Tenerife, as we're terribly tired of the gray skies over London this fall. So we're off to 'The Island of Eternal Spring'. 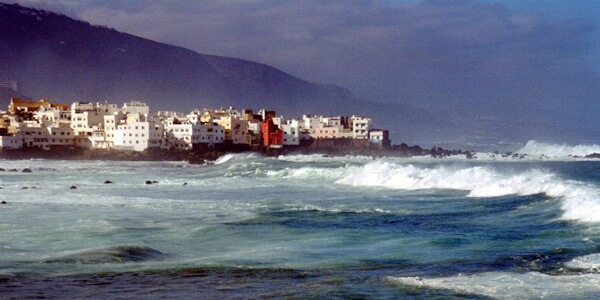 The island of Tenerife is part of the Canary Islands, a part of Spain, on the same latitude as Morocco and is blessed with some great weather. The temperatures stay above 70 Fahrenheit even in January and but don't get too far above 95 degrees or so in summer. During the summers, holidays in Tenerife are quite popular with the charter crowd, but the island calms down during the winter and both locals and tourists get a break.

The volcanic soil of the island is quite dry, so it's an arid and craggy landscape surrounded by water, it promises to be quite pretty. We've got a car lined up, so will take a bunch of pictures of the more remote areas as well as the cities and towns. Of course, Santa Cruz de Tenerife will be covered pretty well as that's were the hotel is. More on Tenerife from Wikipedia.

Getting around on Tenerife

By far, the easiest way to travel around Tenerife is by hiring a car. This way we will have cheap wheels to take up a drive up Pico del Teide and also other parts of the island.

My wife and I aren't sure yet, but we may do a day trip to one of the other islands in the Canary Islands Group. They're only a couple of hours away via the ferry, and some time on the water would be good.

We're definitely visiting the Pyramids of Güímar, in the village of Güímar on the east coast of Tenerife. These are six step pyramids with a rectangular ground plan and there's some controversy around them.

Mainstream archaeologists believe that the pyramids were simply heaps made by native farmers who found the stones while ploughing and stacked them up on the edges of their fields, forming structures resembling agricultural terraces. Indeed, this used to be a common practice on the Canary Islands towards the end of the 19th century.

Apparently, these pyramids once existed at many locations on the island, but most were pulled down because of their supposed uselessness and used as a cheap building material. In Güímar itself there are known to have been nine pyramids, but only six remain. Other pyramids are known to exist in Santa Barbara, Santo Domingo, Garachico, Icod de los Viños and San Marcos, Tenerife.

In 1991, Thor Heyerdahl studied the pyramids and proclaimed that they could not be random stone heaps. Firstly, the stones on the pyramids’ corners show clear marks of working, and the ground had been levelled before the pyramids were built. According to him, the material is not stone from the nearby fields, but lava rock.

Secondly, Heyerdahl speculated that the pyramids had a special astronomical orientation. On the day of the summer solstice, one can see a double sunset from the platform of the largest pyramid – the sun sinks behind a tall mountain peak, passes it, re-appears and sets again behind the next mountain. All of the pyramids have stairs on their western side, which you can climb exactly as the rising sun does on the morning of the winter solstice.