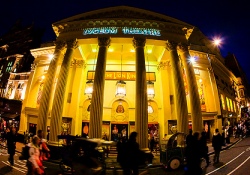 London's West End is on par with New York's Broadway theater district when it comes to top quality big budget theater productions. But with the US Dollar at 2 per pound Sterling, the tickets are outrageously expensive for Americans. Tickets to a standard seat at a London musical performance costs around £50-60, so you'll end up getting hit for $100 or more per person!

How to score cheap theater tickets

Just like in NYC, most London theater productions will offer up discounted tickets, if you know where to look. The ones that don't are usually book every day for weeks on end and if you really want to see the theater play or musical, you'll have to pony up the money. For discounted theater tickets (while in London, these are often referred to as half price theatre tickets) there are a few websites that dig out the best deals for your buying pleasure. Use these sites to find the right discount code and then book the tickets yourself.

Theatermonkey.com lists many half price promotions and theater and dinner packages.

Some more ways to save on theater tickets

Try the 'Fringe' for more options

If you're not completely set on the West End theaters, you can find smaller theaters in the 'Fringe', which is what Londoners call theaters outside of the Theater District. At the Fringe theaters, tickets go from a bargain £5 up to around £30. The Fringe does see a lot of top English stage talent as it's a very valid career path and it's also used to test out new productions before their big West End debuts.

Should you need a ticket at the last minute, there's also the TKTS booth in Leicester Square where tickets are literally half price and stagings on offer include dance performances as well as theater. There's a Manhattan ticket office like it, which is actually older, but the London one accepts both credit cards and cash, so it's a bit more convenient.

So, there you have it, a comprehensive guide to cheap theater tickets in London.