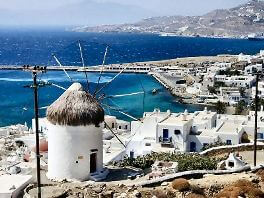 Mykonos is best known for great beaches, nightclubbing, the jet-set lifestyle and having fun. But once you're away from the tourist hustle at the harbor, many of the twisting back streets recall old Greek island life. The image of Mykonos as party central and the island's 800,000 annual visitors means you will have a wide choice of activities, restaurants, shops, and bars.

The island is picturesque and is considered by many as the place to be in the Greek Islands. Others consider it limited, offering only sun, sand and nightlife. However, if that is what you are looking for, this might be the place. But Mykonos is also gateway to Delos. Delos, a small island, is the supposed birthplace of Apollo and Artemis and has many archaeological ruins to explore.

Part of why Mykonos is so popular is the handsome Cycladic architecture. See the image top right and you'll see why!

Mykonos is one of the only islands in the Aegean where scuba diving is permitted; several dive centers rent equipment and offer instruction.

Low season is in September or October, and the island will be much quieter. Still with a pleasant buzz, streets and restaurants are less clogged. Unlike many of the islands, Mykonos remains a year-round destination. In winter it hosts numerous cultural events, including a small film festival.

Getting lost in the labyrinthine alleys of Hora, the main town, is part of the fun here. Searching for the right bar, a good place to eat, or your hotel is sure to be twice as difficult as you'd expected, the old town is certainly meandering and in high season, claustrophobic. The best way to see the town is to start at the harbor and meander inland. Hora is bordered by the bay on two sides and a very busy main circular road on the others, so getting completely lost is a bit hard. Especially as most streets eventually reach one of the main squares: Plateia Mantos Mavroyenous, by the port, Plateia Tria Pigadia, and Plateia Laka.

The town also has an old fortress ruin and the famous Panagia Paraportiani (Our Lady of the Postern Gate) church to explore. Beyond the Panagia Paraportiani is the Alefkandra quarter, better known as Little Venice, for its cluster of homes built overhanging the sea. You'll find a lot of bars here.

The museums in Hora are The Archaeological Museum, Nautical Museum of the Aegean, Lena's House, and Museum of Folklore.

Ano Mera is the island's only other real town and it has a beautiful monastery in the Monastery of Panagia Tourliani, which dates from the 18th century and has a marble bell tower with intricate folk carvings. Half a mile away is the 12th-century Monastery of Paleokastro, in one of the island's greenest spots. Ano Mera also has the island's most traditional atmosphere; a fresh-produce market on the main square sells excellent local cheeses. This is the island's place of choice for Sunday brunch. These outings are easy to do from Mykonos accomodation.

Diving is really popular here, with Mykonos being one of few Greek Islands where it's actually allowed. Scuba diving on many islands is prohibited to protect undersea archaeological treasures from plunder. The best month is September, when the water temperature is typically 75°F and visibility is 98 ft. You can also get your PADI certificate in one of the island's schools.

There's a nearby wreck at a depth of 65-114 ft if you're interested. Otherwise, there's always mountainbiking and hiking to be had. The arid nature is beautiful, and a winter break is great for taking the bike and getting some dirt time in.