A plane from China operated by British Airways crashed at Heathrow today after shearing off its rear landing gear by touching down short of the runway. 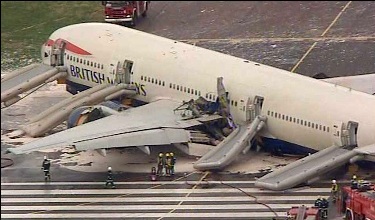 The 136 passengers and 16 crew all survived the crash, which although it looks nasty from the above picture, only injured 13 passengers. The reason for the accident was that the plane, a Boeing 777, lost all power and had to glide in for a landing without engines running. This also meant electronics were out!

The pilot in question is being lauded for a fantastic emergency landing. His performance is proof of how a job we most times think easy and well paid, really is highly important and critical for our safety each time we're taking a flight.

As you can see, the plane is currently sitting on its belly just off a runway, which is currently used for take-offs only.

On its way to the ground, the Boeing nearly clipped John Rowland's cab: "On its approach it took the runway too low, just missing the roof of my cab."

Wow, talk about a lucky day!

Apparently, the survivors of the crash will get a holiday and five years membership of the BA Gold Club frequent flier programme, as Vagabondish reports.

The cause of the crash

Apparently, all 4 engines gave out, which is the reason for the crash.