New Zealand is a haven for outdoor sports where you can ski and go to the beach on the same day. The islands' great sub-tropical climate, modern culture, and English speaking people make it a great long distance destination.

New Zealand was named God's own country and 'paradise of the pacific' as far back as the early 1800s. Travelers generally agree New Zealand deserves this description.

You need to allow plenty of time to travel New Zealand. Many travelers spend nearly all of their holiday time in neighboring Australia, then wish that they'd spent an equal or longer time in this fascinating archipelago.

New Zealand is also known by the Maori name of Aotearoa, which is usually translated as "(Land of the) long white cloud".

New Zealand consists of the two main North and South islands and a number of smaller ones:

Nearly all visitors to New Zealand stay on the main North and South islands, with some intrepid travelers making it to Stewart Island and its fantastic wildlife and forests.

It's the countryside that's the star of the show in New Zealand so we only list the most prominent cities here. Listed in order from north to south:

Things to do in New Zealand 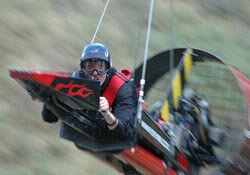 New Zealand is an outdoor sports paradise. It's perfect for mountain biking, wind surfing, hiking, mountain climbing, fishing, and much else.

Kiwis have also come up with some of the more interesting extreme activities the world has seen, such as Zorbing (sometimes called Sphereing, see video below) and Fly By Wire, a complete bonkers fun ride where you're essentially strapped to a wingless airplane on a wire and left to navigate a valley like a fun park ride gone amok.

For a more peaceful time sightseeing, a New Zealand driving vacation brings you to some stunning views and interesting locations.

Photo at top by Stuck in Customs on flickr

Lord of The Rings locations in New Zealand

Stunning New Zealand is where all Middle Earth movies were shot, and you should go see the locations!

Camping in New Zealand's astounding natural landscape is very popular. Follow these tips to stay as safe as you can.

A rental car allows you to see all the parts of NZ that you'd like. Just follow these tips to make your rental experience hassle free.

For a change from adrenaline-filled adventure sports pursuits, maybe try a driving holiday in New Zealand? Here are some ideas to get you started.

There's not much option besides flying to New Zealand. To find a cheap airfare, look at our list of air ticket consolidators and our tips on finding a cheap flight.

All visitors need to provide proof of onwards travel plans (tickets bought) when visiting New Zealand as a tourist. Also, tourists will need to prove they have enough funds to pay for their visit to the country

If you are visiting for three months or less and are from a country in the list below, you will not need a visa.

If you're visiting the country for a short period, up to 3 months, you won't need a visa if you're a citizen of the following countries:

* Visa waiver does not apply to people travelling on alien's (non-citizen's) passports issued by these countries.

*** Portuguese passport holders must also have the right to live permanently in Portugal.

**** Including nationals of the USA.

British citizens and other British passport holders who produce evidence of the right to reside permanently in the UK can visit for up to six months without a visa.

Towns and cities in New Zealand