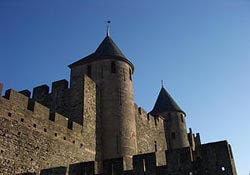 Carcassonne is a pristine medieval town located about 45 minutes south of Toulouse. It is a very easy day trip if you are traveling from the Toulouse area. You can take the train or you can drive. It is best to avoid going there during the summer months as it is quite packed with tourists and the narrow medieval streets will be sure to give you a sense of claustrophobia.

The town is divided into 2 parts, yes this is a simplification but still somewhat accurate, La Cité and La Bastide St. Louis. La Bastide St Louis is the more conventional downtown part of Carcassonne, although it is very old and has a maze of medieval streets too. La Cité is the walled in fortress.

La Bastide St Louis is situated on the left bank of the River Aude. It was built in 1260 in a checkerboard layout. Here you will find restaurants, cafes, shops, boutiques, and other stores. This part is within the city walls and has a variety of architectural styles. The city was rebuilt numerous times so if you have an eye for architectural details you can discern during which periods it was rebuilt by the architecture alone. There is also a beautiful fine arts museum, Le Musée des Beaux-Arts de Carcassonne, and Public Library that are worth seeing. The original city wall has also been rebuilt but some of the original wall remains. The city wall seems more of a suggestion not to enter, it is not really imposing enough to keep intruders out.

La Cité, as in Cité Medieval, lies on the right bank of the River Aude. Work began on this site in the early 1120's. This is a magnificent example of a medieval walled in fortress. It is featured on UNESCO's World Heritage list. It has 52 towers, 2 rings of town walls, and 3 km of battlements. It quite simply looks like a fairy tale version of a medieval castle. There is no restriction on access to this part of Carcassonne so you can walk along the footpaths and climb the steps of this immense structure. There are shops and restaurants located inside this set of walls and even approximately 120 people live within these walls.

Another place to visit is the Basilica of Saint Nazaire, this is a jewel of the city of Carcassonne. It is a vast Romanesque and Gothic church from the 11th and 14th century. Inside the basilica there is the famous relief carving of the 1209 Siege of Carcassonne. A mass is celebrated there every Sunday at 11am. Here's a video from the basilica's interior:

Video courtesy of Richard Randall at Life in France.

There are so many stories and histories to tell one doesn't know where to begin. Originally this was Roman territory. La Cité is actually built over an old Roman fortress. In the 13th centruy this was the stage for the Crusades against the heretics, Les Cathars. It is interesting to note that it was a very diverse city then and many religious groups lived together peacefully, I guess that's why the Catholic Church wanted to put an end to it.

There are plenty of references to a variety of medieval torture chambers and devices. You can even visit a museum dedicated to the torture devices. With the recent news about the CIA's continued use of waterboarding I can say that we happily skipped the entire torture garden.

There seems to be a wide variety of things to do for everyone. More about Carcassonne on Wikipedia.

A gallery of photos on Francetales.com tells a better story than words.

Sometimes it is hard to want to write anything when it is all included somewhere on the internet. Looking over the wikipedia entry either the info from the tourist office is incorrect or the info on wikipedia is, or they both are. Visit the city, it is unbelievable.

Owen and Jean-Jacques moved back to France in September of 2007 and began Francetales.com to document their daily life, interesting travel excursions, and outsider observations. Using text, photos, videos, and soon sound files they hope to give you a taste of life in the southwest of France.

The guys a Francetravel.com are writing some great articles, I'm just happy to be able to publish them.

Sounds beautiful and interesting, it's nice to hear about the lesser-known citys of the more well-known destinations. Keep up the good work!

Annette from tropicaltravel.net on 13 February, 2008