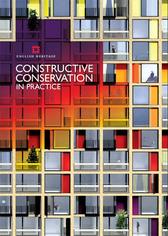 The announcement was made in the Commonwealth Institute: one of the most important 20th-century buildings in London. English Heritage campaigned successfully to save the building from demolition and is delighted that constructive discussions are now underway, with developers Chelsfield Partners, to start its journey towards a new future.

Constructive Conservation is a progressive approach to conservation that involves heritage and development professionals working together as a team and being guided by English Heritage’s newly-published Conservation Principles.  These Principles have become the key to working out objectively which parts of a historic site must be kept and which less-important parts could be changed in order to find the best way to rescue historic buildings and keep them in use.  Many buildings, such as Snape Maltings in Aldeburgh and The Roundhouse in Derby, have now been saved that would previously have been lost. Developers have the guidelines within which to be more creative and confident and the importance of a historic site can be better identified and protected.

A new approach to conservation

Steve Bee, Director of Planning and Development for English Heritage, said: "In some cases historic buildings would have been lost if it were not for progressive and imaginative developers and conservation experts working together in this new way.  Five years ago there was no way to achieve this confidence and these sites would have seemed too risky to developers and would have rotted away."

"Heritage is not renewable, once it’s gone, you can’t get it back. That is why decisions about what must be kept and what can be changed and adapted need to be as accurate and as well-informed as possible.  These heritage-led development schemes are not just attractive and commercially successful, they have enhanced important heritage sites and so added distinctiveness and meaning to the places in which we live."

"The Commonwealth Institute is a spectacular piece of 20th-century architecture and we are proud to have led the successful campaign to stop it being demolished.  The schemes we champion today show what great things can be achieved by collaboration in the face of the pressure to demolish or give up.  Buildings this important deserve imagination and creativity to bring them back to life.  The Institute does not yet feature in this book, but I expect we will soon be able to hold it up as another exemplar of conservation-led development."

The 20 heritage-led development schemes championed in Constructive Conservation in Practice are:

David Hills, Project Architect at John Thompson Architects, said of Royal Clarence Yard in Gosport: "English Heritage was closely involved in all stages of the project, and in many cases was the ‘voice of reason’, providing invaluable guidance on many complex issues."

Christine Rowley, Owner of Blencowe Hall in Penrith, said: "English Heritage has now changed its view about old properties.  Rather than them just being preserved as a ‘ruin’ there can now be a change of use, provided that the renovations are sympathetic."

Jeremy Dixon, Partner at Dixon Jones said of the Regent Palace Hotel in London: "Our meeting on site with English Heritage was absolutely central in unlocking our approach to this challenging project."

Ian Harris, Architect at maber, said of the Roundhouse in Derby: "English Heritage has brought a high degree of involvement and expertise … we have consistently valued their insight and comment.  They have shared our passion and vision for saving this important range of buildings and giving it a very bright future."

Mark Lloyd, Senior Development Manager at the London Development Agency, said of the Crystal Palace in London: "The challenge of designing such a wonderful master-plan within a listed landscape, one that includes listed structures and buildings, benefited enormously from a most constructive association with English Heritage."

Bill Maynard, Managing Director of Urban Splash Liverpool, said of the Midland Hotel in Morecambe:  "With support and advice from English Heritage, the architects (Union North) and the construction team, led by Urban Splash Build, were able to overcome a wide range of highly complex conservation challenges."

The publication Constructive Conservation in Practice is available from English Heritage Customer Services on 0870 333 1181.