The Mining Museum in Falun 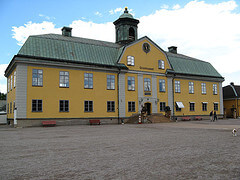 This intriguing Mining Museum, like Falu Koppargruva (Falun Copper Mine), is awarded two stars in the Guide Michelin. The collection of portraits of important people connected to the mine began in the seventeenth century. This was the start of the Bergslaget Portrait Collection, one of the biggest private art collections in Sweden, now housed in the Bergslaget Salons at Stora Enso’s office in Falun.

The collection was begun with master engineer Christopher Polhem’s mechanical alphabet and other models. Established at the end of the 19th century, the museum is now permanently housed in the Main Office since 1922. This is however an exact replica built up in 1966, as mine expansion meant the original building had to be demolished due to the Great Pit becoming even greater.

Much of the original interiors and the exhibitions were transferred to the new museum. Today the Mining Museum shows the history of the mine, the history of copper and iron production, collections of models, cabinets of minerals and coins. Film shows, temporary exhibitions, special events and guided tours are arranged.

5 free things to do in London
Falun Copper Mine