The lift drops visitors 176ft down solid bedrock to the tunnels of this medieval mine. Excitedly, visitors step out and guided through the narrow passes inside the mine will reach the 700ft deep Creutz Schakt. It's cold, damp, and the only sounds heard is the water dripping.

All around there are dark passages branching out in a maze of mine shafts, tunnels, and caved-in galleries. This is the work of nearly 1,000 years of mining activity at the Falun Copper Mine. In Swedish, the name is Stora Kopparberget.

In olden times, the mine at Falun was world famous for its copper and it soon became a big tourist attraction. As far back as 1702, a visitor wrote:” He who has not seen Stora Kopparberget has not seen Sweden.”

There are no records of when mining began here, but there was copper ore being lifted out of the ground by 1,000 AD. The large wooden goat in the photo depicts the legend of how the large copper resource was found. A goat herder was looking for his goat when he noticed how its horns were covered on deep red clay.The mine grew over the centuries and by the 17th century, when Sweden was a great power, the Falun copper mine accounted for 70% of the world production of copper.

The risk of a cave-in was great and a cave-in did occur in 1677. As a result, a miner known as Fet Mats disappeared in the debris somewhere in the galleries. When he was found, 40 years later, he looked just as young as the day he died. The body had been preserved by the air down in the mine and by the water containing vitriol. He achieved fame all over the world as the “petrified miner.” The event received much publicity, especially in German literature and Rickard Wagner even produced an outline for an opera based on Fet Mats. 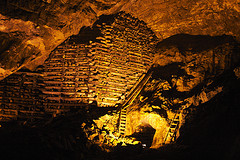 The Falun mine retained its position as Sweden’s biggest industrial workplace for a long time and was a major producer of copper well into the 19th century. The mine was in operation until 8 December 1992, when the last blast echoed through the mine, signalling the end of a thousand years of copper mining. A total of about 30 million tons of ore had been mined, 10 million of this in the last hundred years.

The area surrounding the mine, large parts of the surrounding landscape and the urban environment preserved since the 17th century, together form a unique historical site from our industrial past. The whole area has been declared to be of great historical interest and is now been a UNESCO World Heritage Site.

Interesting facts about Falun Copper Mine

Around the Falun Copper Mine 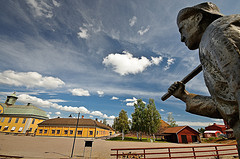 The area around Falun Mine is full of life the whole year round. The path around the Great Pit is a popular route, with fine views of the huge open pit. Many old original buildings still stand at the mine as a reminder of bygone times. Some of the historic buildings are open in the summer. Interesting things can be learned by entering the Ropeworks, the Ore Washery and the Creutz Wheel House.

At some places there are also large heaps of mining waste. To the north and north-west of the mine one can see traces of copper smelting in the form of huge slag heaps. The paint factory continues to manufacture Falun Red from the “red dirt” that lies in big piles in the south of the mine. The water factory is a new establishment for cleaning the mine water and manufacturing saleable products of iron and zinc.

The craftsmen at Falu Emaljskyltar (enamel signs), Stensliperi & Silversmide (stone polishing and silversmithing), Peter Blom (silversmith) and Gruvsnickeriet (joinery) open their workshops to visitors. Food and drink can be enjoyed at the Geschwornergården inn and the cafés Bagarstugan and Gjuthuset.

Important dates for the copper mine

The history of mining in Falun begins in the Iron Age. There was almost certainly mining in the eighth century, and there are indications that the mine could be even older. The earliest extant document about the mine dates from 1288, recording how Bishop Peter of Västerås acquired an eighth share of Kopparberget, then called Tiskasjöberg.

King Magnus Eriksson’s charter to the yeoman miners in 1347 confirms earlier charters and contains detailed rules for how the work at Kopparberget was to be done. The document was supplemented in 1360 with an ordinance on mining, thus setting the norms for the working of the mine until the start of the seventeenth century.

Gustav Vasa quells a rebellion in 1533

In the 15th century the part-owners of the mine, the yeoman miners, acquired great influence on the economy and politics of Dalarna and the whole of Sweden. The guild of the yeoman miners was called after Saint George. No other guild in Sweden has had the same martial character or the same power to pursue political goals. In 1533 King Gustav Vasa lost his patience with the yeoman miners’ rebelliousness and disobedience and summoned them to meet him at Kopparberget. After a thunderous speech that lasted the whole day, the king had some of the ringleaders executed. This was the end of the yeoman miners’ era of political power.

The first map of a Swedish mine was the one showing Falun Mine in 1629. Maps were an essential part of the work to achieve better organization and safer mining. Despite this, the operations at the mine were often driven by greed and ruthless exploitation. This led to several major cave-ins, and the one in 1687 is considered to be the end of the mine’s heyday. 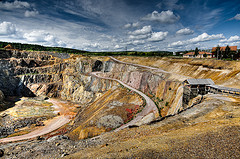 At Midsummer 1687 ominous noises began to be heard in the mine, and on 25 June the biggest cave-in ever took place. The earlier open pits – Blankstöten, Bondestöten and Skeppsstöten – collapsed to give one huge gaping hole. The next day a large part of the Bockbacken pit also collapsed. The result was the Great Pit, with a depth of 100 metres and debris down to a depth of 300 metres. Rumours of the event spread quickly, not just because of the size of the cave-in but also because not a single person was killed. The workers were all free for Midsummer.

History and Dust in the Wind

What a fascinating read that was! I feel as if I have already visited that which used to be the recipient of massive interest and work thanks to the descriptive imagery and information. This is a destination that I would love to reach one day. I wonder if I could feel the energy that was once present? I am sure though that it would be an exhilarating experience.

The worst that could happen is that you'll sprain your ankle by being clumsy. The mine is decommissioned and it's solid granite bedrock, so no gases anywhere.

Very descriptive - both the history and the physical appearance of the place. I almost felt like I was there.

i don't think I'll ever visit this place, but if I do - I'll have to thank you for this article!

Just curious as to whether this place is 100% safe. Are there any chances of accidents or some toxic gas leaks etc?