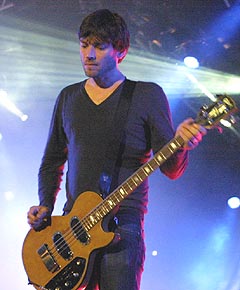 Today a young woman who seems very sweet wrote and asked me if I had any advice about becoming a music journalist. This is what I told her:

There are so many other things I could have told her... about principled journalism... about the dangers of the overuse of hackneyed catch-phrase... about how Cameron Crowe got it right in Almost Famous when his script stated "These people are not your friends."

I remember when, at 22, I breathlessly fumbled my way into a sound check at Irving Plaza just so that I could give a musician a drawing I'd done of him.

Getting into the building was as easy as asking if I could use the loo. They didn't even check my ticket. I could have saved my money and not bought one. Oh, well.

Once in the door, I shivered behind a pillar in the lobby, terrified that some goon with a walkie-talkie would discover me and toss me out.

Somehow I knew that this was my chance. I didn't know what exactly I'd do - just that I had to stay in the building until the interview was done.

The crew began to unpack their equipment and set up in the lobby. They bustled around like worker ants while I tried my best to look like I belonged there. I watched everyone and I didn't say a word.

When I could tell they were finishing up, I sidled up next to a woman in her 80's. "I, uh, like your hat," I commented.

"No," I said, without elaborating. We began to make small talk. She explained to me that she was an actress, and that this filming was for a VH-1 show. Another man in his 80's sat down on the other side of me. Soon one of them asked me about the manila folder I was carrying.

I showed them its contents: a colour copy of my original drawing. (I still have the original. My devotion only went so far.)

Both the man and the woman exclaimed over my artwork. This somehow gave me enough adrenaline so that when the producer materialized in front of me, I wasn't intimidated.

The producer looked down his nose at me and said, "And you are?"

(Yes, some people really do talk that way!)

He didn't shake my hand.

I turned to the little old woman and winked. "I'm here with her," I said, grinning.

"Is that right?" the producer addressed her.

"Yes, that's right, she's here with me!" asserted the woman. God bless her.

The producer wrinkled his brow. "I still don't understand," he said. "You're here for?"

"I brought my drawing," I said. "And I figured I'd come in and get out of the cold."

"The cold?" he repeated.

"Yes, the cold," I told him firmly. I looked at him like he was the dumbest man I'd ever laid eyes on. Then I said, like it was the most obvious thing in the world, "It's cold outside."

Cowed, the producer muttered, "Fine. Just stay out of the shot."

This marks the first time I had the realization, "I can do this," in regards to working in the world of entertainment.

And I did give the musician my drawing after the shoot. As I walked away, he pulled it out of the folder and said, "You did this?"

I turned around. "Yeah. Me and Kinko's," I answered. Then I went into the ladies room and washed my face for about ten minutes until my pulse gradually - finally - slowed.

The actress and I stayed in touch for a few months. She told me that the producer had called her on the phone and fallen all over himself asking about me. "Who is she? She must be somebody, because she can't be nobody - she's got to be somebody," he reportedly babbled.

"Tell him I'm nobody," I instructed her, and we had a good laugh.

There's always an alternate route. Use it.

Why I no longer want to be Lester Bangs