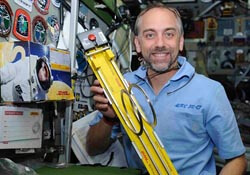 Space Adventures, Ltd., announced that its orbital client Richard Garriott and his crew successfully landed in the Kazakhstan steppes after a visit to the International Space Station (ISS). Garriott returned to Earth aboard the Soyuz TMA-12 spacecraft with Expedition 17 crewmembers Sergei Volkov and Oleg Kononenko, who both spent six months aboard the ISS.

"This mission to the ISS fulfilled a lifelong dream to experience spaceflight as my father first did 35 years ago; it's an honor to be the first American to follow a parent into space," said Richard Garriott. "This experience made possible by Space Adventures from my training in Star City, to lift-off, orbit and finally docking with and staying on the ISS -- has been more gratifying than anything I could have ever imagined." Garriott continued, "While in space, I had the opportunity to conduct scientific experiments and environmental research, but what was most rewarding was speaking to students. Growing up in an astronaut family, I firmly believed that every person could go to space, and now I have. I took this opportunity to inspire them with my adventure and let them know they can achieve their wildest dreams as well with hard work and perseverance."

Eric Anderson, president and CEO of Space Adventures, said, "We're proud to have assisted Richard in achieving his lifelong goal of spaceflight. This history-making mission not only made Richard the 1st second-generation astronaut, but also opened the space frontier to commercial opportunities, which truly demonstrates the reality of private space exploration."

On October 12, Garriott launched aboard the Soyuz TMA-13 from the Baikonur Cosmodrome in Kazakhstan. He joined Expedition 18 crewmembers Mike Fincke and Yuri Lonchakov, for the flight. They arrived at the space station on October 14 and were greeted by the Expedition 17 crew.

In preparation for his spaceflight, Garriott completed a cosmonaut-training program at the Yuri Gagarin Cosmonaut Training Center located in Star City, Russia. During his stay aboard the ISS, Garriott focused on scientific and environmental research, as well as educational outreach:

Garriott has been chronicling the details of his mission, from training to landing, on his web site Richard in Space with photos, video, audio, in-depth blogs and answers to questions posed by visitors to the site. Now back on solid ground, Garriott will continue to share his experiences on his site, expanding upon his time aboard the ISS and providing insights into his landing and return to Earth.