TripAdvisor now warns their reviews may be faked 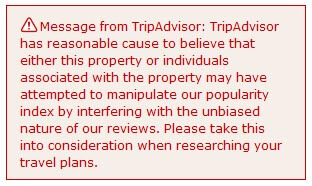 This was long overdue, but TripAdvisor now puts warnings on some pages where they believe the reviews may be unduly influenced by someone associated with the hotel. It's been a prett well known secret that 'user generated' reviews on TripAdvisor have often been put there by the hoteliers or someone on their staff. After all, it makes sense for the hotels to make sure there are positive reviews about the hotel in question.

Here's what TripAdvisor says in its message:

TripAdvisor has reasonable cause to believe that either this property or individuals associated with the property may have attempted to manipulate our popularity index by interfering with the unbiased nature of our reviews. Please take this into consideration when researching your travel plans.

There's a screenshot of the warning message above. And here's what it looks like on the site.

This was eloquently, and fiercely, highlighted by the Beat of Hawaii blog and it was picked up by Arthur Frommer too.

When I did a quick search, Google had found 142 instances of these warning messages on TripAdvisor, but there are undoubtedly many more. As said, why would a hotel not put up fake reviews? I've always been very careful about the reviews, and have come across one or two dives that had decent or even really good reviews available. There's nothing like a recent personal reference, certainly compared to the minefield of searching online.

But since you really can't trust guidebooks (since they're usually out of date) or newspapers (I should write a piece on press trips), the review sites are the best source for independent hotel information that's available.

What do you think? Do you trust online reviews? If so, why? Hit the comments!

Yeah, many of the reviews aren't based on real experiences. Some people are writing just like that or have some interest to write what they are writing. As far as the review writing is free for all there will always be some people to do anti-marketing. Quite normal. Tripadvisor are just trying to avoid any legal actions over their content.

We are in the business of researching reviews that travelers submit on our website, darngooddigs.com. We use TripAdvisor as one of many sources, but on its own it just isn't completely reliable. And when we do use TripAdvisor, we have to use some serious detective work to double check reviews and weed out suspicious posts. That said, we still think TripAdvisor is a useful resource if you use it carefully.

In the end, though, human edited sites like ours are going to be much more reliable - but we will never be able to have nearly as much content as Trip Advisor.

Then there's the issue of owners of competing properties putting up negative reviews of nearby hotels / guesthouses. So, you can't really trust the negative stuff either, so leaving the visitors in a no man's land of unreliable user generated content.

There's no perfect way. As you said, guidbook, newspaper, online reviews all have their limitations. However, still generally trust online reviews. The owners may submit positive reviews to favor themselves, but they can't control negative remarks, if the real situation is really bad. And usually, bad words speak louder. And like tripadvisor, the websites are paying attention to the issue, and trying to limit fake reviews as much as possible.

“We believe our nearly 25 million reviews and opinions are authentic, honest and unbiased, from real travelers, which is why we enjoy tremendous user loyalty. Also, the sheer volume of reviews we have for an individual property allows travelers to base their decisions on the opinions of many.

The integrity of TripAdvisor reviews is protected by three primary methods:

1. Every review is screened prior to posting and a team of quality assurance specialists investigate suspicious reviews

3. Our large and passionate community of more than 25 million monthly visitors help screen our content and report suspicious activity

When a review is suspected to be fraudulent, it is immediately taken down and we have measures to penalize businesses for attempts to game the system. Penalties are handled on a case by case basis.”