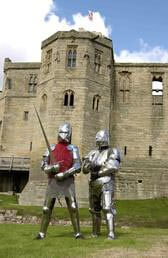 Built in the mid 12th Century, Warkworth Castle is one of the largest, strongest and most impressive fortresses in northern England.

The castle was one of the star attractions in the Visit North East England’s television advertisement earlier this year. The castle has been the backdrop for several regional events, such as, the Northumberland Lights Festival in winter 2007 which won several awards, and English Heritage’s St Georges Day celebrations.

Alan Cater visitor operarations site supervisor atWarkworth waspresented with the award at the same ceremony where another English Heritage employeewongold in the Customer Service category.

The magnificent cross-shaped keep of Warkworth, crowning a hilltop rising steeply above the River Coquet, dominates one of the largest, strongest and most impressive fortresses in northern England. The castle's most famous owners were the Percy family, whose lion badge can be seen carved on many parts of their stronghold.

Wielding almost kingly power in the north, their influence reached its apogee under the first Earl of Northumberland and his son Henry 'Harry Hotspur' Percy, hero of many Border ballads as the bane of Scots raiders and a dominant character in Shakespeare's Henry IV, Part I. Having helped to depose Richard II, these turbulent 'kingmakers' both fell victim to Henry IV: the next three Percy Earls likewise died violent deaths.

Still roofed and almost complete, the uniquely-planned keep dates mainly from the end of the 14th century. It presides over the extensive remains of a great hall, chapel, fine gatehouse and a virtually intact circuit of towered walls.

Half a mile from the castle, tucked away by the Coquet and accessible only by boat, stands a much more peaceful building: the late medieval cave Hermitage and chapel of a solitary holy man.