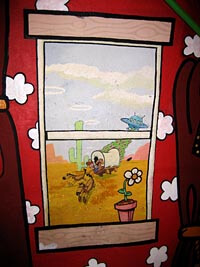 With a stroke of luck, we found the best and cheapest hotel in Manhattan on our New York trip: The Carlton Arms Hotel.

The Carlton Arms is an art hotel. Or maybe that should be the hotel is art. The whole place is covered in murals that guests/artists have painted over the years. Check out the hotel website for photos of all the rooms, the illustration in this article is from the staircase and part of a larger Western scene.

Our room was a tranquil French countryside pastoral scene, which in hectic New York was a really nice break!

Right now, they've got two new rooms done, by East Coast graffiti artists and they do look very vibrant. Ask for rooms 10C or 6A if you want to be hooked up with those new rooms.

The Carlton Arms rates are quite good - and fantastic for New York. Prices go up with the number of occupants, but for us two with a private bathroom, the rate was $130 per night (Nov. '07) and it goes up to $180 per night for 4 people. Many rooms have shared bathrooms, and those are a bit cheaper.

History of the hotel

The 54-room, five story building has been a hotel for most of its 100-odd years. During Prohibition, the hotel lobby was converted into a speak-easy and big money card games were played in the rooms upstairs. While the hotel was then respectable for a while, in the fifties it turned sleazy and a hangout for hookers, addicts, and drag queens. Worse, during the sixties it turned into a welfare hotel by the City of New York.

Then, in 1981, when the hotel's manager had a complete nervous breakdown, Ed Ryan, back in New York from ten years of world traveling, inherited the job.

"The hotel started its downward slide about 30 years ago and had reached a good groove own by 20 years ago. By the early '80s, the Carlton Arms was full with madmen, junkies,comedians, ex-cons, pushers and hookers, transvestites, drunks and nuts of all kinds, women who beat you in exchange for your pay, a new generation of hippies and life's lost and lonely. It was a place to bed down and indulge," he explains.

To fix the hotel, any vacated rooms were now fixed up and rented to travelers who didn't mind roughing it a little in exchange for a bargain room rate. Artists (as always looking to spend less) started using the hotel and sometimes working there - and they begain to paint. First in the staircase and then inside the rooms. The first fully painted room happened in 1984 and since then every room has been given the artistic vitamin injection.

There are 54 rooms, plus hallways, bathrooms, lobby, and staircases. They are all an explosion of color and creativity in Manhattan - turning this once decrepit building into something very special.

I stayed there in 1989 with my two sons, (age 23 and 21 then) for a week in February of that year. Having read about this hotel in a Danish newspaper a few years earlier, I just phoned them and made reservations. What a wonderful experience! Everybody at Carlton Arms Hotel was helpful and friendly. I can today see that the rooms since 1989 have been repainted by other artists, but sure still looks great. I am glad this this hotel is still alive!