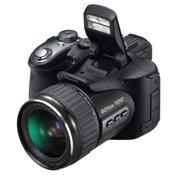 Today I ran across the Casio EXILIM EX-F1 - a six megapixel camera with 12x zoom and some very impressive burst shooting capabilities. The camera captures up to 60 frames per second at full resolution and a staggering 1200 fps if you drop the image size to 336 x 96. And you can also shoot 1920 x 1080 Full HD movies at 60fps.

Helping to ensure the elusive travel moment isn't missed is a buffer system which continually updates then saves the contents to card when the shutter is released. Lighting is taken care of by a conventional strobe which works at up to 7 fps and a cellphone-style LED for 10-60 fps.

Another cool feature is a Sensor-shift image stabilization system to help you get rid of camera shake. Perfect for when you don't have a tripod available. In other words, nearly always.

This camera is available from Amazon.com from $1299.

You can also find this camera at Amazon.co.uk for about £500.

Here's a full press release about this cool camera::

The EXILIM Pro EX-F1 incorporates a new high speed CMOS sensor and high speed LSI processor. After building in 6.0 million effective pixels and a 12X optical zoom, the developers focused on achieving a burst shooting speed capability that was hitherto unheard of. Using the camera’s ultra-high speed burst shooting for still images or its high speed movie recording mode, users can capture a split second’s movement with greater detail than before, allowing them to catch each decisive moment, and even motion that the human eye cannot ordinarily perceive.
*As at January 6, 2008, based on a Casio survey for the consumer market digital cameras.

Don’t miss that crucial moment, Prerecord Still Images, using ultra-high speed burst function
Users can record images not just at the instant they press the shutter button, but before! Continuously recording at up to 60 images per second, a maximum of 60 images can be saved in the camera’s own buffer memory even before the shutter button is depressed. Even if users press the shutter a little late, they will still be able to catch that vital moment.

Slow Motion View function lets users view and capture that critical moment in slow motion during still photography
Users can take photographs while, in the monitor, the momentary action that is before their eyes is displayed in slow motion. It is just as if they have slowed down the passing of time. Users can unhurriedly observe the motion of the subject as they press the shutter, ensuring that they never miss that crucial moment.

High speed movie recording at up to 1,200 fps
The EXILIM Pro EX-F1 can record high speed movie footage of motion too fast for the human eye, for ultra slow motion playback. Users can select a recording speed of 300 fps, 600 fps or 1,200 fps. There is also a Movie Button that lets users quickly start movie recording without first switching from still image mode.

I really like this camera, and it should be a forerunning option for your next all-in-one travel camera. The fact it takes great quality video really sets it apart from the competition. It's not a cheap camera by any means, but could kick your travel photo results up a notch or two.