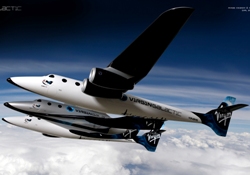 Spaceport America, the future New Mexico private space launch site for Virgin Galactic, Rocket Racing, and XCOR Aerospace, broke ground for construction on 19 June 2009. This means space tourism is one step closer, though still far behind schedule as Virgin Galactic had hopes for launching commercial flights during 2009. That, sadly, no longer seems to be the case. Maybe just as well, as I didn't get to save up the $200,000 a ticket is planned to cost.

Executive Director Steve Landeene of the New Mexico Spaceport Authority (NMSA) commented, "The groundbreaking for Spaceport America is the beginning of a historic new chapter in New Mexico's long legacy of space and cutting-edge technology. From the pioneering rocketry work of Robert J. Goddard in New Mexico in 1930, the beginnings of America’s space program in the 1940’s and 50’s to the ongoing NASA programs at White Sands Missile Range and now to Spaceport America, the Gateway to the Future."

Here's a video of the ground breaking ceremony at Spaceport America:

Virgin Galactic President Will Whitehorn was excited to be at the groundbreaking for Spaceport America. “The groundbreaking is an enormous milestone for Virgin Galactic which is investing over $300 million in developing a new space launch system which will operate at Spaceport America after it opens. Today's event clearly signals the birth of a new commercial age in space and is a proud moment for the vision and foresight of both the people and government of the state of New Mexico.”

The groundbreaking on 19 June starts off the construction of the cutting edge space tourism facility. Spaceport America's terminal hangar facility will be built to the U.S. Green Building Council's LEED rating system. Extensive use of sustainable and clean energy technology throughout the design will ensure that the spaceport will set the standard for environmentally sound design for similar structures in the future. From earth-tubes that will pre-condition the air to reduce HVAC costs by 50-70% to solar thermal panels on the roof for hot water to the embedded in-floor loop system, Spaceport America is both unique and iconic in terms of visual and environmental design. Here's some construction video:

This means a private space terminal is now closer to reality than ever, and maybe we'll see those private space flights take off within the next few years. I'm looking forward to further news about this with interest, and would dearly love to be on one of the flights.