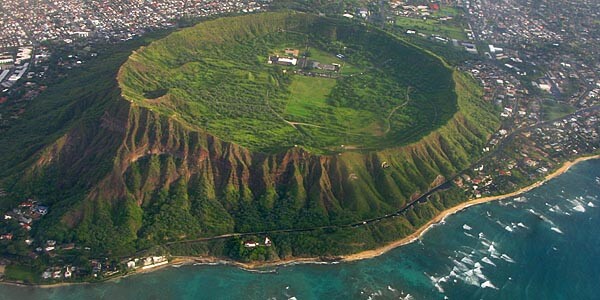 There are many exquisitely beautiful views in Hawaii, but few of them are as lovely as the view from the top of Diamond Head crater. Located on the south east coast of Oahu, near Honolulu, the crater is what's left over from a volcanic explosion that occurred around 500,000 years ago. If you are willing to take the time to climb to the top of the crater, you will be able to use one of several observation decks to admire the entire west side of Oahu.

Diamond Head crater received its name from British soldiers in the 1880's. The soldiers mistook the calcite inside the rock to be diamonds. Prior to this, it was referred to as Laeahi by Hawaiians.

Though the hike to the top of Diamond Head is set up to be climbed, its still very exciting. The trail has tunnels you must go through, as well as dark military bunkers, so you should bring a flashlight along with you. It has 175 steps in total, and it should take you about an hour to get to the top. The crater is open to visitors from 6 a.m. to 6 p.m.

Though the trail can be a bit difficult to climb, there is a rest stop located along the way, and the view and the top is definitely worth it. The pictures you will be able to bring home after reaching the top will be something that you can cherish forever. Climbing to the top of Diamond Head crater is definitely something you should be planned for if you're planning a trip to Oahu.