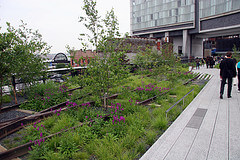 Look up in the sky “It's a bird, it's a plane.” Ok, the High Line Park in New York, isn’t that high, but it is something to marvel at. Opened in June of this year, the High Line Park is bringing green to a previously disused part of New York. In the Chelsea area (more specifically: Gansevoort Street in the Meatpacking District to 34th Street, between 10th & 11th Avenues) is now located a park up above the street, where a train line used to run. To get up, there are stairs and at least one elevator. Go up there. It is something new in a city which can jade someone, it will hopefully lead the way for many more parks like it, bringing trees and grass to those in the most urban of areas.

The view of the Hudson and New York is unlike what you will see anywhere else; imagine the green of Central Park mixed with the view off the roof of a building. Access to the park is free and it is open from 7am to 10pm daily, there are light installed to illuminate the park at dark. The rules may be seen as a bit strict but they are all for the good of the park and the people below it. For instance, no dogs allowed, because they could upset the growth of the fragile grass, and no playing catch or Frisbee, for obvious reasons. The Friends of the Park have started holding events on the High Line, including an art gallery-like event. Someone even held their wedding there. It is quickly becoming an established landmark of New York City.

I can't wait to get back to NYC to see the HighLine. What a great, creative idea.