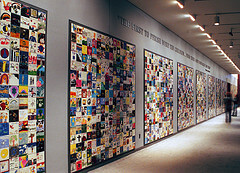 There are many sad periods in world history and one which is still in living memory for many of the older generation is the Holocaust. It is important to keep people aware of these events, both to respect the memory of the people who suffered and also to try and ensure that the terrible events are not repeated. The Holocaust Museum in Washington D.C. carries out these two important tasks.

The museum was founded in 1993 and is one of the worlds leading authorities on the holocaust. It houses a permanent exhibition, spanning three floors of the museum, which provides a stark reminder of the horrors that took place during this period of the Second World War and of the suffering that ordinary people endured. Other exhibits can also be viewed including one for children called "Remember the Children: Daniels Story", which is more suitable for kids to view and is used by many schools and colleges for education.

The museum also holds a program of regular events and you should check on arrival what these are for the day of your visit. There is also a library on the fifth floor, which has many books, photos and videos that can be viewed to gain a better understanding of the holocaust.

The museum is open daily and for your own education and remembrance is definitely somewhere you should visit. If the memory of these terrible events can be kept alive, then hopefully in future there is less likelihood that they will happen again.

Exhibitions are open between 10am and 5.20pm, see the website for other hours