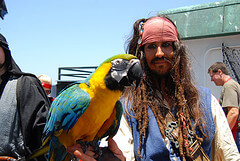 If you find yourself in Key Largo, Florida, around the end of October, keep a weather eye on the sea and your gold, for that is when the Pirates descend and take over the beaches and bars for four days. A bottle of rum is opened, with Captain Morgan himself there to attend, and the partying commences. The Key Largo Pirate Fest celebrated its 2nd year in 2009 and is quickly becoming a tradition. Grab a corset or a frilly shirt, an eye patch and for the more dedicated, a peg leg and join the fun.

There are pirate games, pirate bands, pirate stories, pirates fighting, and of course a lot of pirates drinking. Enter the costume contest or make a float for the parade and definitely join in the underwater treasure hunt.

The local bars all participate, with specials for all. Even charities get involved with sales and contests to help the less fortunate children in Key Largo. The pirate fest is like a Renaissance Faire, mixed with a Star Wars convention only it's about pirates. It celebrates the romantic, imagined pirate, rather than real buccaneers, though they will argue about that.

With wenches, dashing men, scurvy, gold, rum and sailing what's not to like?

Well, other than the scurvy.