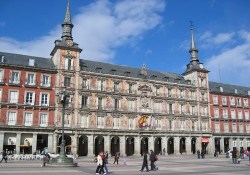 Madrid may be lacking in architectural beauty compared with other major Spanish cities, but it makes up for this with its boundless energy, blue skies, art, culture and some of the most exhilarating and exhausting nightlife in Europe. The city is compact and easy to navigate on foot - most of the sights of interest are found in the downtown area between the Royal Palace and Parque del Retiro.

The capital of Spain since 1562, Madrid sits in the geographic center of the Iberian Peninsula and has long been an important stop on any art tour through Europe. The famous Museo del Prado on the city's 'Museum Mile' houses important works by Spanish and European masters from the Renaissance onwards, while the Museo Thyssen-Bornemiza houses one of the most extensive private collections in the world. The Museo Nacional Centro de Arte Reina Sofia is devoted to 20th century Spanish art, with works by Miro, Dali and Picasso.

Visitors wishing to take a break from all that art may want to see the Plaza de Toros, Spain’s largest bullring, where regular bullfights are still held. Sports fanatics who like something a little less blood-thirsty can watch Real Madrid, or Atletico de Madrid, Spain’s most famous football teams kick off.

The city sits atop a plateau and is the highest capital in Europe, making its climate somewhat extreme with steaming hot summers and bitterly cold winters. Spring is the best time to visit and explore the squares and alleyways in the heart of this crowded city.

Renowned as the oldest and most famous tablao flamenco (flamenco show restaurant) in the world, the show is also listed as one of Madrid's top ten sights. The establishment draws kings and queens, international presidents, film stars, and well-known artists and writers who come to witness the nightly performances of top flamenco stars while receiving excellent service and dining on exquisite meals prepared by some of the best chefs in Madrid. Website.

Madrid's world-famous attraction is the 213-year-old Prado Museum, one of the world's greatest art galleries, with more than 7,000 paintings that include masterpieces by Fra Angelico, Botticelli, El Bosco, Titian, Rembrandt and Velazquez. The museum began as a Royal collection, which succeeding dynasties have added to. The collection naturally focuses on the Spanish masters, particularly Goya, whose exhibited works follow the development of his painting from the sun-soaked early scenes of joyful festivities to the grim madness characterising his ‘black period’. The Prado has few equals - whether you are an art lover or not.

Madrid’s famous central arcaded square dates from 1619; it was built by Philip III whose statue still stands in the center of the cobbled expanse. In medieval times the Plaza de Arrabal, as it was then known, was the venue for numerous public spectacles, ranging from knights' tournaments and festivals to the burning of heretics at the stake. Today it remains a public gathering place, but the majority of people who congregate in the sidewalk cafes to sip sangria on summer nights are tourists, enjoying impromptu music performances and watching the passing parade.

The massive bright-white Royal Palace (Palacio Real) on the Plaza de Oriente in Madrid dates from 1734, when the 3,000-roomed royal residence was commissioned by Philip V. It was last called ‘home’ by the royal family in 1931 - the present king, Juan Carlos, lives in the more subdued Zarzuela Palace outside Madrid. Most of the rooms are now open to the public, and others are used for state business. English tours are run regularly, lasting about two hours, taking visitors to the reception room and state apartments, the impressive armoury and the royal pharmacy. The grandiose state apartments are filled with art treasures, antiques and opulent Roccoco décor that could even rival Versailles.

The Panteon de Goya is situated in the Glorieta de San Antonio de la Florida and is known as Goya’s Sistine Chapel. The artist decorated the dome and cupola of the little chapel with a fresco depicting the miracles of St Anthony, with the use of sponges, a project that took 6 weeks to complete. Mirrors have been placed in strategic places to provide better glimpses of the art. The chapel also contains the artist’s tomb.

Madrid's lush central park, one of many green spaces in the city, covers 350 acres (142 hectares) and was laid out originally as the private garden of Philip IV. The vast park features formal gardens, statuary, fountains, lakes, exhibition halls, children's playgrounds and outdoor cafes. Visitors can stroll among the trees, admire the rose garden, and take a boat ride on the lake. At weekends the park comes alive with buskers, clowns, fortune-tellers and sidewalk painters. The park, abutting the Plaza de la Independencia, is open daily from 6.30am to 10.30pm.

If you're looking for a full on night out in Madrid, head to the area north of Gran Via. While you'll find plenty of adult shops, meat markets (and I'm not talking about butchers'), and ladies of the night, you'll also be in the most vibrant bar district of Madrid. After 9 pm, the bars and restaurants around Calle des Infantes are pulsing with a young, trendy, and energetic crowd. Grab some tapas at El Tigre together with a drink or two and head out into the evening.

Note that the area is considered a little sketchy, so keep your wits about you and all will be fine.

The climate of Madrid is dry, warm and pleasant. It's high altitude and proximity to mountains causes some wide variations in winter and summer temperatures. In summer the heat at midday can be intense, with pleasantly cool evenings. Winters, by contrast, bring temperatures dropping to just below freezing. Rain in Madrid is a rarity, with a short rainy season in late October and some showers in spring.

Spanish is the official language, but English is widely understood in areas frequented by tourists. Catalan, Galician and Basque are spoken in the relevant areas.

There are no health risks associated with travel to Spain, and no vaccination certificates are required for entry. Bird flu was detected in a dead bird in July 2006, and although there is little risk to travelers, close contact with live birds should be avoided and all poultry products well cooked as a precaution. No human deaths or infections have been reported. Spain has a reciprocal health agreement with most EU countries, including the UK, providing free emergency health care at State run hospitals. UK travelers should take a European Health Insurance Card (EHIC). Note that private clinics are not covered, and the scheme gives no entitlement to medical repatriation costs, nor does it cover ongoing illnesses of a non-urgent nature, so comprehensive travel insurance is advised.

Spain's official currency is the Euro (EUR). One Euro is divided into 100 cents. Money can be exchanged at bureaux de change and major hotels, but banks give the best rates. All major credit cards and travelers cheques are widely accepted at most hotels, restaurants, and shops. ATMs are widespread and are generally the cheapest and most convenient method of obtaining money.

Hotel and restaurant bills usually include service charges, but additional tips are welcomed for services rendered. In restaurants tips of about 15% are expected. In Mallorca value-added-tax is usually included in restaurant bills, designated 'I.V.A', and may be mistaken for a service charge. Drivers of metered taxis expect tips of 10 to 15%. It is customary to tip small amounts, usually 5-10% for most services, including guides.

The Basque terrorist group, ETA, declared a permanent ceasefire beginning 24 March 2006. The group has been responsible for numerous bomb explosions across Spain, and is blamed for the deaths of over 800 people in its fight for independence, which has lasted for four decades. The announcement could be the first step towards peace between the Spanish government and the ETA. There is still a potential risk of international terrorism, as in other countries, although the risk to tourists is considered to be low.

However most visits to Spain are trouble-free, except for street crime, which is common in the big cities, and travelers are advised to take precautions to avoid theft of passports, credit cards, travel documents and money. Be wary of strangers offering or asking for help of any kind as it is often a distraction for accomplices. There are scams involving letters sent, either stating that the visitor has outstanding traffic fines from their stay, which must be paid into the given bank account before a certain date, or notifying the visitor that they have won the Spanish lottery and are required to deposit an amount of money into a bank account to secure their winnings.

From 1 January 2006 laws against smoking in public places came into effect and stiff fines will be imposed for smoking in areas such as enclosed public spaces, areas where food is prepared and sold, public transport, designated areas of bars and restaurants, and any places that cater for children.

Madrid has a great range of hotels, from utter luxury to cheap hostels. We find that Madrid Hotels from Destinia is a good resource for finding a place to sleep.

The airport is served by regular buses, the metro system and taxis. The airport bus connects to the Plaza de Colon, departing from the Arrivals level of each terminal every 15 minutes day and night. The Madrid Metro station is in Terminal 2. Trains run daily between 6am and 1.15am, linking to the city and stations connected to the main rail network. There are official taxi stands outside each terminal, and visitors are advised to use these rather than unofficial taxis. Journey time to the city center is around half an hour.

I have read many blogs about Madrid and it gives me a feeling that it has become one of the top tourist destination in the world now.

Your blog provide a good overview of the places to stay.

I studied abroad in sevilla, but went to Madrid and it was awesome!!! But also visit Sevilla if you get the chance.