The Oak King is celebrated each midwinter during the Montol Midwinter Festival in deepest Cornwall, England. This yearly festival starts off with an impressive procession to the oldest part of the town, the Lecudjack Hill Fort. These Rivers of Fire Lantern parades set off after dark, and feature thousands of revellers dressed in masks and carrying lanters.

Once the Parade reaches the fort, the beacons (large bonfires) are lit, symbolizing the return of the light on this the darkest night of winter. 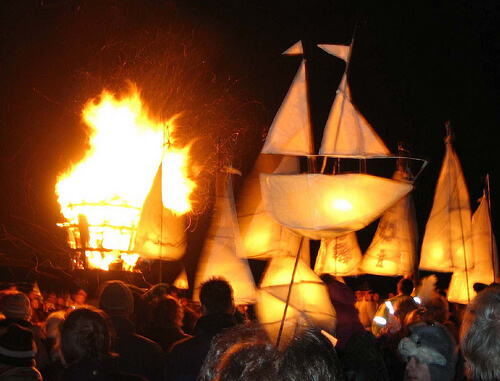 The Montol Festival takes place in the week before Christmas and is free to attend. The main event, the Parade of Fire, always takes place of the evening of 21 December.

If you go to the festival, you'll get to enjoy Guise dancing, sometimes known as Goose dancing. People dress in gentleman's hand me downs, and masked ball style masks to hide their features sometimes blacking or whiting up to complete their disguises, gender reversal was often a part of the celebration with some women dressed as men an vice - versa. They are sometimes dressed in tatters like those worn by some kind of morris dancers.

Part of the tradition of wearing masks during the festival, a "Lord of Misrule" is chosen to oversee the revelry. Otherwise known as "The King of the Bean" or "The Abbot of Unreason". This person is selected by the casting of lots in particular using coloured beans. In many places this Lord would have been accompanied by a Master of Ceremonies or Sergeants of Ceremonies often mocking the official offices of state.

These are ancient rites, celebrating the onset of midwinter, the time of the Oak King's rule until midsummer, when the Holly King from ancient lore takes over.

It may be that all these traditions hark back to pagan celebration of old, in particular the Roman Saturnalia feast that Christmas absorbed in the 4th Century. What is very clear is that prior to the Cornish conversion to Christianity Midwinter and Midsummer were times to mark with feasting, joy and celebration and that folk memory is not easily erased. The Penzance community will continue to mark these occasions with happiness and find meaning for some either in the feast of St Thomas, The Midwinter Solstice or as the noted historian AK Hamilton Jenkin said just for fun "For is that not the very best reason to do these things".

Long long ago, this was a time of celebration and sacrifice. Today, the celebration remains, but sacrice is significantly reduced, though Baccus gets his due via many a reveller's hangover after the festival.

Looks like a fun festival to be part of, and a good excuse to get lashed!

Fabulous! I love Cornwall - it's my favourite part of England. And who can resist pagan celebrations with fire and dancing? The true meaning of Christmas, eh?