Open House London is an annual event that gives Londoners and visitors the opportunity to visit, for free, a huge range of architecturally interesting buildings that aren't normally open to the public. This year's event takes place on September 19-20 - here are my favorite properties to look out for and book tickets for ahead of time.

There will be hundreds of places to choose from over the weekend, with access to the vast majority of buildings on a turn-up-on-the day basis. But since some buildings have a limited capacity, pre-booking is vital for some of the sites. To book, visit www.openhouse.org.uk/london. Free copies of the Open House London program will be available from libraries in participating London boroughs.

Sites open on both days

A cube clad in a cedar rainscreen, stained dark brown - a single slot window at the front is all that indicates this is a house. The entire site was excavated to basement level in order to create the sunken foundation on which the house now sits. Hemp insulation improves the thermal performance of the structure while the solid timber frame provides a significantly reduced carbon footprint.

One of the largest construction and engineering projects in Europe, the Olympic Park that is currently being created on a 2.5km sq site in the Lower Lee Valley will be at the heart of the 2012 Games. Afterwards the site is set to become one of the largest new urban parks in Europe for 150 years. Construction work is well underway on the ‘big five’ venues: the Olympic Stadium, the Velodrome, the Olympic Village and the International Broadcast Centre/Main Press Centre.

Open on Saturday 19 September only

Housing reference collections, office and laboratories, the Laboratory fits in with the local environment - horizontal cedarboard cladding will mellow to similar colour of trunks of eucalyptus trees outside. Louvred exterior and computer-controlled windows to regulate heating/cooling. Visitors will be able to view all the laboratories on ground floor and the basement of Wolfson Wing.

It’s claimed that the 34-storey, 121m Grade II-listed central London landmark was the first building in London to be erected without the use of scaffolding (the prefabricated precast-concrete H-shaped units were lifted into place by crane). Visitors will be able to see the reception area, CBI podium level, and the eighteenth, thirty-first, thirty-second and thirty-third floors. Iconic it may be, but it's not very pretty to look at.

Contemporary courtyard style house with a low profile of just 7m. The house is a linear arrangement of rooms accessed from the 40m long double-height gallery surrounded by established trees and shrubs which also creates a boundary wall enclosing the garden. On the Saturday of Open House weekend the ground floor and part of the first floor will be available to view. 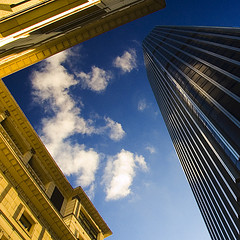 The City of London's tallest building, consisting of three hexagonal chevrons, at 601ft was the first to break previous restrictions on tall buildings in London. During a comprehensive refurbishment in 1995, a new glass and steel entrance hall was built on Old Broad Street and the external steel cladding was replaced. On Open House weekend visitors will be able to view the foyer and levels 24 and 42.

This 1933 Grade I-listed block of flats is a seminal piece of modernist architecture designed by Berthold Lubetkin and inspired by Le Corbusier’s ideas. Intended as a new answer to the problems of high-density urban living – which had previously been solved by building out into the suburbs – it was intended as working-class housing but, being in Highgate, quickly became a very desirable middle-class address. The Open House guided tour covers the common parts, including recently restored foyers and the interiors of two flats which retain many original features such as cork floors, concertina windows and metal doors. Entry is by accompanied tour only.

Open on Sunday 20 September only 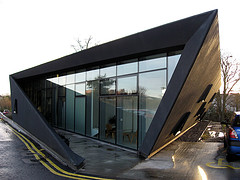 Goldfinger’s 31-storey ‘Unité d’Habitation’ in W10 was originally built as social housing but it’s now one of London’s more desirable addresses. Monumental in style, with its free-standing service tower and surreal boiler house, the Trellick Tower retains beautiful detailing and a rich use of materials. The lobby and two or three flats will be available to view.

Unique, award-winning, contemporary low energy house on brownfield site with striking glazed and planted facade hidden in the heart of Shoreditch, developed as a prototype for green urban terraced housing. Sustainable features include solar control facade with evergreen shading, lightweight steel, timber frame and solar thermal hot water system. Underneath the plants, this is a state-of-the-art green-living machine, developed as a prototype for eco-friendly urban terraced housing of the future.