How to protect your credit card on the road 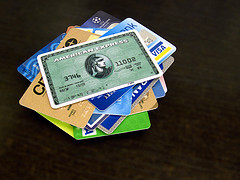 Recently, it seems that the amount of credit card fraud being carried out against travelers has risen very fast. Myself, I've had my credit card cloned twice while away in the last few months. So, I've studied up on what you can do to protect yourself against credit card fraud while traveling.

Restrict credit card use to a single card

By using only a single card, you will know much faster if there's a problem with it. If your card details are swiped by a waiter, store, or cab driver and then used for defrauding you, there's only one bill to check. And, quite possible, your card will be blocked by a suspicious transaction, leaving your other cards functional. Of course, if the worst happens and your credit card details are stolen, there's also only one fight to have with the credit card issuer.

It's not always possible to avoid online purchases while traveling, especially if you're on a longer trip and setting up your itinerary while on the road. However, as you're likely not using your own computer, your details can be stolen by someone getting them from the computer. This could be via a keylogger of some sort. Naturally, internet café computers and hotel lobby computers are a goldmine for fraudsters, as many people are likely to use them for various transactions.

As with avoiding online purchases, stay away from logging in to any credit card website, or entering your credit card details on a computer that's not your own. And definitely remember to log off if you have to, as many people tend to leave their details right there on screen for anyone to see.

One simple way to steal your credit card details is less tech-savvy than a keylogger: If you're using your card on a computer in a public place, a thief could simply look over your shoulder and make a note of your credit card number, address, and so on.

You might want to keep more than one card with you. For example, if one card stops working suddenly, you'll have a backup. Also, some car rental outlets require hefty deposits, meaning your credit could end up being maxed out. And of course, some stores only take certain card types, so having a backup to that American Express or Diner's card is probably good.

Of course, don't make things worse by carrying a big wad of cash rather than a credit card though. You're more likely to be robbed or have your pockets picked than end up a victim of credit card fraud. And if you lose cash, there's no recourse except maybe your travel insurance. With a credit card, you may eventually get your money back.