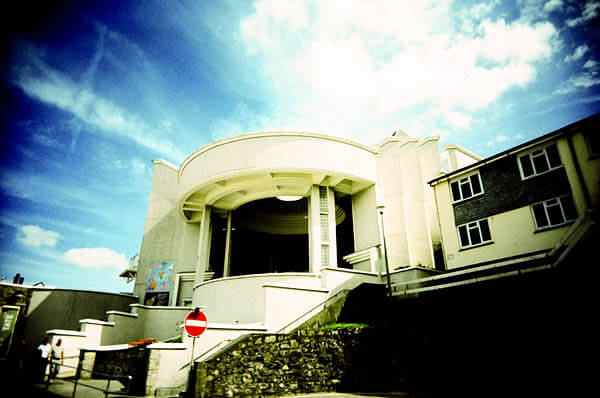 The Tate Gallery in St Ives is a sibling to the other Tate Galleries; Tate Britain, Tate Modern, and Tate Liverpool.

It was opened in 1993, and is in a beautiful building that sports (among other things) a magnificent stained glass window by acclaimed painter Patrick Heron.

The museum is dedicated to the modern art of St Ives, where a distinctive school of art sprung up there in the 1920's, and it's for those works that St Ives is internationally known.

The displays change regularly, so that a wide array of works form the Tate collection can be shown every year. There are, however also temporary exhibits that revolve around a particular artist or a theme.

It's a delight to walk around this wonderful gallery, taking in the local artwork and then settling down with a cup of tea in the excellent café. And it's quite easy to bring your baby as well; the museum offers a baby care room that you can take advantage of and everything is wheelchair and babycarriage accessible.

Before you abandon the gallery, be sure to make a stop in the gift shop. They offer a selection of products that feature the works of local artist and make for great presents for friends and loved ones, or just a nice addition to your own kitchen.

Also worth a visit is the Barbara Hepworth Museum and Sculpture Garden, which is now a part of the Tate St Ives, but originally opened in 1976. It's situated a mere 10 minutes from the Tate Gallery and is home to fantastic sculptures that are still where they were originally placed by the artist.