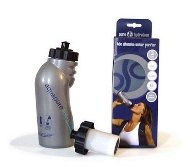 If you're heading for the farthest reaches of Earth, or five minutes away from the corner store, clean drinking water becomes a priority. With an Aquapure Traveller bottle you'll always have water with you.

The system works by a three-stage water purification system that disinfects and eliminates chemicals, dirt, bacteria, and odors. Basically, simply pour some questionable water into it and get drinking water coming out.

Before you're off on your next backpacking trip, check Aquapure Traveller prices on Amazon.co.uk

and bring a bottle along. It'll save you some money and it's good for the environment too.

Freecycle your way to being green