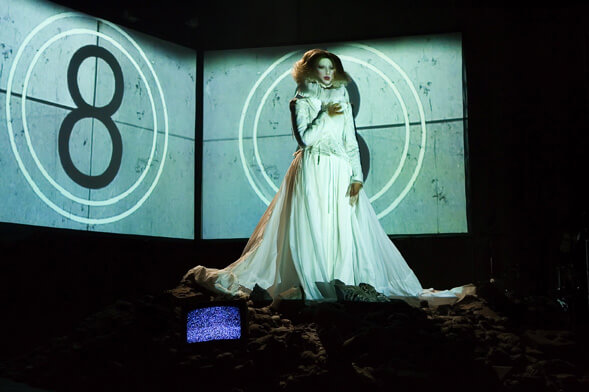 Are you just not typical of the usual Broadway musical theater-goers? Does the idea of going to the Metropolitan Opera bore you to tears? Do you enjoy innovative entertainment, the avant-garde and the modern? Do you like entertainment that makes you think, entertainment that's provocative, that perhaps maybe even makes you feel a bit uncomfortable? Perhaps you enjoy discovering artists that are up-and-coming, artists that are independent from the mainstream.

If you answered "yes" to any of the above questions, The Abrons Arts Center is the perfect place to enjoy an evening of entertainment far away from the standard fare on Broadway. This is also true geographically. The Abrons Arts Center is located at 466 Grand Street in New York City. Instead of a location in the center of midtown like the Broadway theaters, The Abrons is about as far "off-Broadway" as you can get. You'll find The Abrons in the Lower East Side neighborhood, with Chinatown and the East Village nearby. If you visit The Abrons, try to spend some time in the surrounding neighborhoods before or after the show. In fact, take a close look inside your Playbill when you take your seat at the Abrons. Sometimes they will include a coupon within the Playbill or with your ticket to present to a local restaurant after the show. One of the restaurants which offer this at times is Two Boots Pizza, which offers some of the most unique pizza slices in NYC. These are some of the neighborhoods that will show you the 'native New Yorker' experience, and you will be very happily "off the beaten path" here.

"Off the beaten path" is one of the best ways to describe the performances at the Abrons Arts Center, too. The theater itself is quite charming and has a classy, turn-of-the-century look. The outside of the theater is particularly quaint, with a "little red schoolhouse" sort of feel. The lobby and main theater space are filled with chandeliers and other little touches that add a sense of fancy. The theater space is large enough to feel as if you are part of a crowd, but small enough to feel intimate. Because of this there are very few bad seats in the house, although you may want to avoid sitting to the extremely far left or extremely far right to make sure you have unobstructed view. The majority of performances are general admission seating, so having your pick shouldn't be a problem – especially if you are sure to arrive a bit early.

The theater hosts performances by a variety of innovative and ground-breaking artists of all sorts. They often have art installations in addition to the performances. The indie group Iron & Wine has had performances here, so it's worth a look at their calendar if you are an indie music/alternative music fan. There are plenty of experimental theatrical productions for the theater fan that's tired of the same old showtunes.

A few that I would give an extra recommendation to look for on their events calendars include The Big Art Group, which has shows that are a dizzying mixture of art installation, music & song, video installation, audience participationhttp://www.eyeflare.com. they will immerse all of your senses in their shows. Some members of The Big Art Group – Rob Roth and Theo Kogan – may also be showing works separate from The Big Art Group that I also highly recommend.

Justin Bond has performed in a few of The Big Art Group's shows, but also frequently hosts shows of their own at The Abrons Arts Center. Justin is a legend in the downtown NYC performance scene & beyond, and rightfully so. Justin's voice is unforgettably powerful and not to be missed. Shows with Justin at the Abrons are often during the holiday season and the summer season, and if you are lucky enough to be in town for these shows you are in for a treat!

Be forewarned that some of the shows and performances here are definitely not family fare or for the easily offended. Some of their shows involve nudity & the like, others have burlesque dancers. As stated previously, this is definitely not your typical Broadway or opera fare! If this may be a problem for you, do research or give the Abrons a call or e-mail. The staff is rather informed and helpful and will be able to provide more details on this or any other questions you may have.

So jump right from that midtown hotel and jump into the deep end of the downtown theater scene at the Abrons Arts Center. A new appreciation might be gained, for the performers, the neighborhood and the wonderful world of off-Broadway theater & performance at the Abrons.