The Colossi of Memnon, near Luxor, Egypt 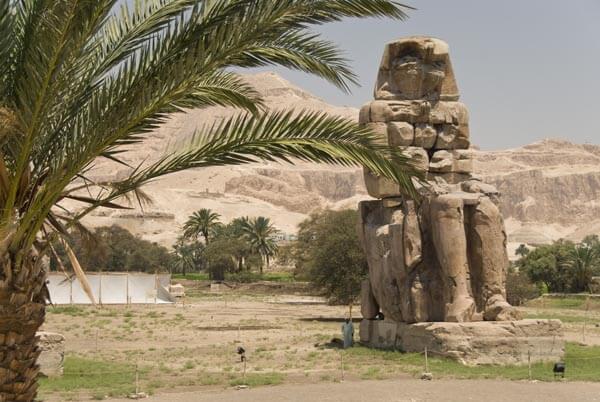 If you get to Luxor, Egypt, the Colossi of Memnon is a sight to see. These stone statues of Pharaoh Amenhotep III have been standing guard over the Theban Necropolis since 1350 BC. They depict Amenhotep III in a seated position facing east with his wife, Try and mother, Mutemwia alongside his legs. The sideband depicts the Nile God Hapy. These magnificent sites are made mostly of blocks of quartzite that were transported 420 miles. The statues are known to locals as el-Colossat, or es-Salamat.

The purpose of the massive statues was to stand guard at the entrance to Amenhotep's Memorial Temple. This massive cult center was built during his lifetime and was where he was worshipped as a god-on-earth before and after his death. In its day, the temple was the largest and most opulent temple in Egypt, however; very little remains of the temple today. The name of this spectacular sight came from Memnon, the King of Ethiopia and a hero of the Trojan War.

The Legend of Memnon has always surrounded the location. This legend says that if you hear the statue “sing,” it will bring you good luck. The legend stems from rumors and reports of the statue “singing” on occasion, usually an hour or two before dawn. The reports of this began in 27 BC when an earthquake shattered the eastern colossus. The statue was repaired in 197 BC, which coincides with the last reports of the “singing statue.” Even though, many take trips to the site in hopes of hearing the statue. The site alone is definitely worth the trip.

Colossus of Memnon location and hours

The Colossi of Memnon are situated about half a kilometre east of the Antiquities Inspectorate (the ticket office) on the main road to the West Bank monument area.  The statues are always open and no ticket is required.