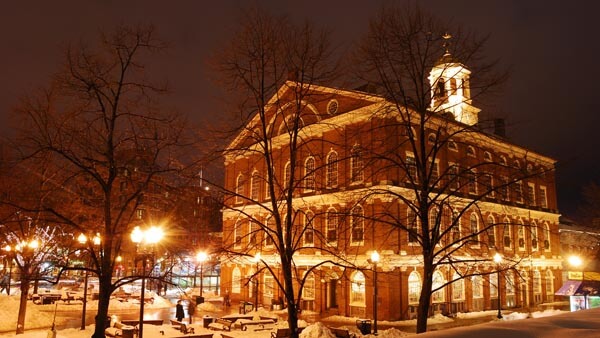 Faneuil Hall Marketplace, Boston, was known as "The Cradle of Liberty" by our nations founding fathers. It was nearly torn down in the 1950's until a group of concerned citizens worked to preserve it in the 1970's. In 1742, Peter Faneuil, built and gifted Faneuil Hall to the city of Boston. It became a home to fishermen, merchants, and produce sellers and birthed the "no taxation without representation" doctrine that would help lead to our national revolution. It has been the place or many great speeches from our countries history including the toast to the nation by George Washington on its first birthday.

Today "The Cradle of Liberty" as the marketplace is nicknamed is actually made up from four different places, Faneuil Hall, Quincy Market, North Market and South Market. These are located around a old school, cobblestone center that is used by magicians and other artist to entertain visitors. There are more than 100 shops to visit and the Bulmarket, which is a group of pushcarts selling arts from the surrounding areas. The famous Cheers Pub is here as is 13 other locations for food or drink. There are numerous events held here including a spactacular 4'th of July Harborfest celebration.