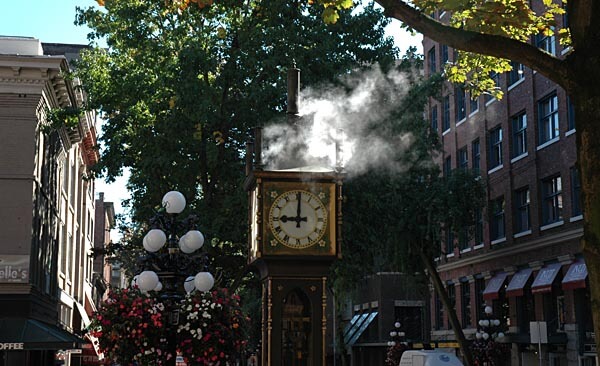 A tour of Vancouver, Canada will not be complete without visiting Gastown. Because it is here the history of Vancouver began. Named after the gold prospector 'Gassy' Jack Deighton in 1867, this city, which has gone through its ups and downs, is today a charming mix of the old and the new. The old buildings which were on the verge of deterioration were restored in the 1960s realizing its historical importance.

One of the major attractions in Gastown is its steam powered clock which whistles every 15 minutes to signal the time. Other attractions in Gastown are the Alexander Building, Byrnes block on the site of Jack Deighton's house which housed the Alhambra Hotel and the Europe Hotel which was the finest hotel of Vancouver at that time. It was the first fire proof hotel in Western Canada. Another attraction is the Lamplighter pub in Dominion Hotel which was the first in Vancouver to serve alchahol to women.

You may take a walking tour of Gastown to explore it. The tour starts near the statue of Gassy Jack at Maple Tree Square. This will take about two hours. Do take some time to read the plaques placed everywhere in Gastown which tells us about the 19th century buildings. Many businesses here are open on Sundays also so that the visitors can see the renovated interiors. Nightlife in Gastown is also very vibrant with many pubs and discotheques. Major annual events held here include the Vancouver International Jazz Festival and Tour de Gastown international bicycle race. Gastown was declared the national historic site of Canada in 2009.

Gastown is located near the harbor, between Vancouver's Chinatown and Portside Park.