When someone suggests that you should go to Hell, it’s can be taken rather offensively. Why would anyone want to go to hell? However, if more people knew that Hell can be found right in the middle of a tropical paradise, the phrase “go to Hell” might become the best travel advice you’ve ever heard.

Hell in the Cayman Islands, is named after a very interesting and unique rock formation, is a small village. You can find various souvenir shops where you can purchase proof of your "trip to Hell", and even a post office, which is the only place in the world that sends out post cards postmarked from Hell. 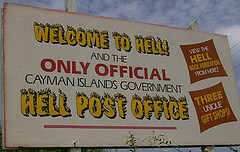 Being able to say that you’ve been to Hell and back, and not be lying, is quite a unique experience to have, but your trip to Hell can be about much more than puns. The rock formation which Hell got its name from is an amazing sight to behold. Limestones peek out from the ground in very unique, spiky shapes, surrounded by greenery. The rocks are very reminiscent of how Hell has been depicted in movies and literature, and they are even more awesome in person than in pictures.

The village of Hell can be easily accessed by bus. Although it is a very small village with little more than shops and a post office, it’s a must-see if you are visiting the Cayman Islands. Not only will you be able to take in some of the great sights of nature, but you will be able to use the pun with your friends for years to come. So the next time someone tells you to go to Hell, perhaps it wouldn’t be such a bad idea to take them up on their advice, and send them a post card from Hell to prove it!