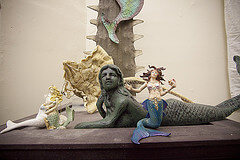 Have you ever wondered if the Abominable Snowman or “Nessie” the Loch Ness monster really exists? A good place to find out is at this fascinating museum in Portland, Maine. The museum is named for the science “Cryptozoology” which is the study of animals which have no proven evidence of existence. However, forget the technicalities; this attraction is packed with exhibits and specimens gathered over the last fifty years although the history goes way back. Contemplation, food for thought, anecdotal evidence and even real yeti hair are on offer here! Amongst the eclectic mix on display there are models of cryptids (the animals) and even fakes that have fooled the world down the years. Most interesting is the explorers study with a dusty, musty feel of authenticity which also contains one of the museum’s first artefacts, a flag from a 1960’s expedition.

The full size replicas are really works of art and feature “Bigfoot”, a pterodactyl and the captured mermaid of Barnum circus fame. One special exhibit is the model of the coelacanth fish which is known as a living fossil as it was believed to be extinct and was rediscovered in 1938. The museum has aptly used this wonderful creature as its symbol and logo. The museum is easy to find and well-documented with the tourist office of Portland and has rest room facilities and a small gift shop. Photography is allowed but in keeping with other museums, the exhibits are not to be touched. Open all year round except when the proprietors are on special missions or showing their exhibits on television, this is not just a fun place to visit but is educational and truly interesting. Children will love it and adults will be intrigued by the evidence that has been gathered.

Thank you for this review of our museum.

One correction: We are open on Mondays, now, from noon to 4 pm. We have found this is important since most of the art galleries and museums in Portland are closed on Mondays, and people are always looking for things to do on Mondays, especially Monday holidays.

Some other clarifications are required, based upon the comments more that the review.

This is the only cryptozoology museum in the world. Whereas other museums may exist for Bigfoot, Nessie, Mothman, and other varied individual cryptids, we are the only generalized, all-encompassing cryptozoology on Earth.

We are a scientific, natural history, and educational nonprofit corporation registered in the State of Maine. We are not hokey or campy, but serious, passionately open-minded and yet appropriately skeptical about our subjects. Yes, we have exhibits devoted to popular culture artifacts, art, and faux cryptids, but more significantly, we have one-of-kind evidence (such as fecal material, hair samples, and original footcasts) from expeditions, full-scale replicas of coelacanth, Bigfoot, Sea Serpent, and other cryptids, and over 3000 individual items to examine.

There are actually other cryptozoology museums, believe it or not. I think it goes half each: Serious about the topic, but also make some fun of the topic presented as it's pretty bizarre stuff.

I had no idea a place like this existed. So is it fun in a hokey, campy kind of way? Or are the other visitors there totally serious?