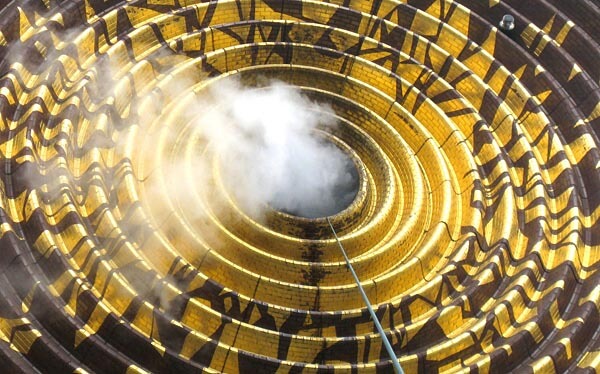 The metronome clock, which is the most confusing clock in the world, is located in New York at the southeast corner of Union Square between 4th Ave and Broadway on the south side of 14th St. Conceptual artists are rarely after designing public clocks and Metronome is the good example of why this is the case.

Metronome is an interesting, strange and huge artwork to take in. It covers most of the outside of the 1 Union Square building that faces the Union Square and is over a hundred feet high: The clock fills the entire outside wall. At the center of a bulls-eye of twenty four carat gold covered with bricks is where steam plumes puff out of a hole with white steam. The steam puffs released at midnight and noon are especially large.

“The Passage” is the clock part of Metronome and is set to a hundredth of seconds with big digital numbers ticking with atomic precision. There are fifteen digits that spell out the time if you know how to read the backwards numbers and the maddening mix of military time. For example, 144500000001509 is the number that the Metronome would display in the afternoon at about a quarter to three. If you saw 200658907015303, it is 8:07 in the morning.

The Metronome clock has been ticking away since the year 1999 but many people in New York do not even realize that it is a clock.

The Metronome
One Union Square
Between 4th Ave and Broadway on the south side of 14th St.
Manhattan
New York City