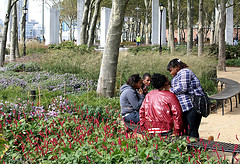 The Garden of Remembrance in the Battery Park, New York City is an expansive twenty-three acre park in downtown, Manhattan. People also refer to it as the “Emerald Doorstep to the Metropolis” or the “front lawn” because of its location at the tip of Manhattan.

The park faces the waterfront on one side and the section of Manhattan known as the Battery on the other side. Battery Park is a popular lunchtime hangout location because of its close proximity to many businesses and many of the finest attractions in New York City such as the Staten Island Ferry, the New York Stock Exchange and the South Street Seaport. More than thirty-five thousand people live within a walking distance of the Garden of Remembrance at Battery Park.

The park got its name from the Dutch Settlers who landed in New Amsterdam in 1609 and formally settled in 1625, who named the area Battery because they set up a battery of canons on the location to defend the new city. As the years passed, they enlarged the area as well as the fortification. In anticipation for the War of 1812, people built Castle Clinton. The park has experienced improvements since 1994 mainly under the efforts of a non-profit organization known as the Battery Conservancy.

The organization has raised more than sixty million dollars to refurbish Battery Park, has rebuilt, and redesigned the sea wall as they restored the Castle Gardens. They have given Castle Gardens the name Garden of Remembrance in remembrance of the survivors of the September 11, 2001 terrorist attacks.

The Battery Park is located at the southwest tip of Manhattan, and easily accessible via public transport.

The Battery is accessible from State Street and Battery Place. It is adjacent to the Staten Island Ferry Terminal.

Dogs are welcome to the park, but must remain leashed.