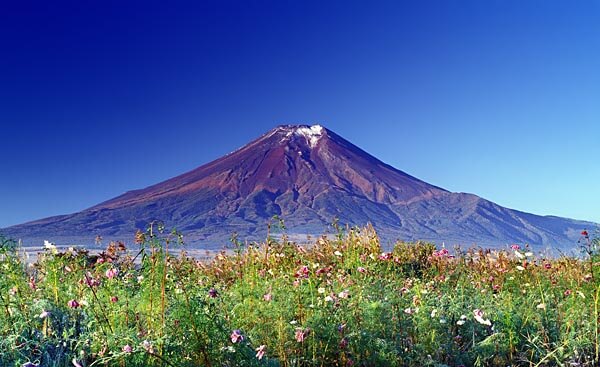 Mt. Fuji is sure to be one of the highlights of your trip to Japan. It is about sixty miles southwest of Tokyo and is an easy trip from that city. In 2009, Mt. Fuji Shizuoka Airport opened which is the closest airport with international service and is about 50 miles away. The mountain itself is a sacred Shinto shrine and a place for pilgrimage. It now appears serenely on the horizon but last erupted in 1707 spewing clouds of ash.

The mountain is a beloved symbol of the Japanese nation and has inspired artists for centuries. It is one of the most recognizable and photographed mountains on earth. You will be struck by its beauty and will remember it as one of the high points of your Japan trip.

There are a number of ways to experience Mt. Fuji. One can arrange a climbing trip with numerous tour operators during climbing season, which is July and August. It is not safe to climb at other times in the year when there is snow and extreme cold at higher elevations. Remember to dress appropriately if you are going up the mountain and bring extra clothing even during climbing season. If you are unable or unwilling to hike or climb up the mountain, other options are to arrange bus tours from tour providers that will take you up to various points on the mountain.

There are many other points of interest to see while visiting Mt.Fuji such as the Narusawa Ice Cave; the Aokigahara Lave Forest and Wind Cave; and several lakes, the deepest of which is Lake Motosuku.

If you are staying overnight in the area of Mt. Fuji, there are a number of inns and hotels that make a good resting stop. Rates and accommodations vary from budget to more upscale.