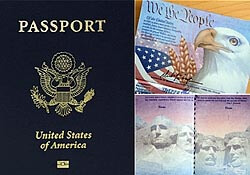 American and Canadian citizens will need to follow new documentation requirements to come into the US or Canada from abroad. The Western Hemisphere Travel Initiative (WHTI) requires U.S. and Canadian travelers to present a passport or other document that denotes identity and citizenship when entering the U.S. It is a result of the Intelligence Reform and Terrorism Prevention Act of 2004 (IRTPA). You must have one of the following documentation for entry in to U.S. land and sea ports:

The goal of WHTI is to facilitate entry for U.S. citizens and legitimate foreign visitors, while strengthening U.S. border security. Standard documents will enable the Department of Homeland Security to quickly and reliably identify a traveler.

These rules are in effect from 1 June 2009 for land and sea borders, and have been in effect since 23 January 2007 for air travel. This is a significant change in the rules for Americans and anyone planning a getaway this summer would do well in applying for their passport as soon as possible. The paperwork will take a few weeks to process and without it, you'll have some very unnecessary hassle getting back into the country.

That's even if you're just popping over to Tijuana for the evening.

Americans, get your passports now
Frommer's top 12 destinations for 2009