See the inside of Thrihnukagigur volcano, Iceland

Ever wondered what a volcano looks like from the inside? Ever wanted to witness the pure, raw, volatile nature of red hot flowing magma? Do you literally want to stand as close to the core of the earth as humanly possible?

Thrihnukagigur is one of Iceland’s biggest volcanoes, spanning a huge 13 miles across it’s protected surrounding areas of Blajoll Country Park. It has 3 huge craters(which is where it get’s it’s name), the biggest allowing room for three full sized basketball courts to fit side by side and tall enough to squeeze in the Statue of Liberty into!

Iceland in general is a geological hot spot of all kinds of activity, from earth quakes and tremors to untouched/unspoiled areas of awe-inspiring natural beauty where nature has just been allowed to take its course. Due to its unique location on the Mid-Atlantic Ridge, Thrihnukagigur is one of Iceland’s most active volcanoes. This is caused by the Eurasian and North American tectonic plates colliding together and literally opening up the earth’s crust – in the form of Thrihnukagigur.

What makes Thrihnukagigur different from other volcanoes? 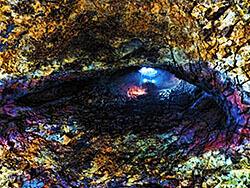 Usually in typical volcanoes, the magma chamber which is located in the heart of the volcano is where the source of liquid magma eruptions comes from. Thrihnukagigur is different as its magma chamber is completely empty. Scientists believe Thrihnukagigur magma is located within the main chamber walls or has simply retreated back to the earth’s core. Its last eruption was 400 years ago, so we won’t know for sure where its magma is stored until this monster decides to blow again.

In a nutshell, this is what makes Thrihnukagigur different from other volcanoes as you can actually descend down the main crater and stand in its magma chamber – as it is empty and you won’t be burned alive by red, hot magma like if you were to do the same thing in other volcanoes!

What can I expect from a tour to Thrihnukagigur?

When you land in Iceland you can arrange your own way to the region of Thrihnukagigur or be picked up by one of the many tour operators in the area.

The actual tour of Thrihnukagigur consists of a 50 minute hike up to the crater of the volcano through some of the most beautiful Icelandic countryside and outback. Once at the crater you will be lowered down into the magma chamber by a specialist team, which will also supply you with the necessary safety equipment and breathing apparatus. You will have a guided tour around the chamber, along with photo opportunities and then will be escorted back to the surface of the volcano’s crater.

To stand in the heart of a volcano should be something that should be on everyone’s bucket list. Let’s just hope the fiery beast of Thrihnukagigur doesn’t decide to arouse from its long slumber when you’re actually in it! Never fear, all volcanoes give a number of obvious signs that they will erupt long before they do, so you will have little chance of been caught unawares within its fiery depths!

Photos by Robert Nunn and Dave Marcus on flickr