Take photos of police in England and risk arrest 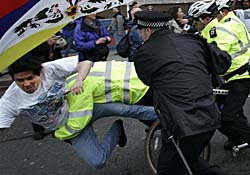 New legislation in the UK means anyone taking photos of the police will risk arrest and imprisonment under anti-terrorism law, the section 76 of the Counter-Terrorism Act 2008. This not only includes professional photographers, but the "Counter Terrorism Act allows for the arrest and imprisonment of anyone whose pictures are ’likely to be useful to a person committing or preparing an act of terrorism’."

That would include your average tourist or amateur photographer, should a police officer take offence to their image being recorded.

This naturally sets a dangerous precedent, given the number of times police officers already stop and search photographers in England using Section 44 in the anti-terrorism legislation.

In the Guardian, we find this comment from the Home Office regarding this new legislation: "A spokeswoman for the Home Office said the law was not specifically intended for photographers and concerns about how it would be used were speculative. It would be the job of the police and the courts to interpret the law."

Unless you’ve been living under a rock during your adult life, you know that police officers when pushed will always interpret laws in a manner giving them the greatest amount of flexibility. Which means we can expect to see this new law, going into effect on 16 February 2009, used to stop, search, and hinder photographers either doing their job as agents of the free press or amateurs documenting social events.

For an example of what could happen, this is what one person who’ve already seen the sharp side of the police’s attitude regarding photographers said to the Guardian: "Val Swain, a member of Fitwatch, a collective which photographs police intelligence teams taking pictures of protesters, said: "I took a picture of an officer on my camera phone and he walked over and said, ’you are going to delete that’."

Freelance photographer Justin Tallis is another who has had issues with police interfering with his legal work, in a quote from the British Journal of Photography: "According to Tallis, the officer then tried to take the camera away. Before giving up, the officer said that Tallis ’shouldn’t have taken that photo, you were intimidating me’. The incident was caught on camera by photojournalist Marc Vallee."

Make up your own mind, are you prepared to continue exercising your right to photograph in a public place with this new legislation in effect?

This law is ridicoulous and won't do anything to stop (the very low) risk of terrorism.

How would photographing a police officer be dangerous and when has there ever been a specific example of it being used in an actual attack?