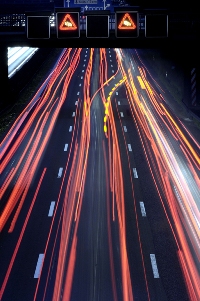 Whenever you visit Germany, you'll end up driving on the Autobahn. The Autobahn is the German highway network, known for its lack of speed limits and very large number of German luxury cars going very fast indeed. Trying to navigate the Autobahn network can be a humbling experience, so I thought to share some basics about getting around and a few places to visit while doing so.

Some cities to visit by car in Germany

Fast driving has a proud tradition behind it in Germany. The country constructed the first motorway system in the world, the AVUS, and the world's first car was also built in the country. The road system is quite extensive, with the most paved miles of road per capita of any country including the U.S.A.

Visitors to Germany do not find much to make them linger in the sprawling city of Frankfurt on the River Main, unless their purpose is business rather than pleasure. For most visitors to the country, however, Frankfurt’s huge showpiece airport is the point of arrival and departure. The city is a major transport hub and an industrial and financial metropolis that ensures it is the economic powerhouse not only of Germany, but central Europe. Frankfurt is home to Germany’s central bank, the Bundesbank and Europe's most important stock exchange, which has been trading since 1585.

For tourists Frankfurt does offer some sights, some intriguing restaurants in the Nordend, a variety of artistic and cultural events, and excellent shopping opportunities. Sightseeing opportunities are mostly confined to the historical core of the city, known as the Romerberg, where Charlemagne erected his fort in medieval times. Most of the original buildings were destroyed during World War II, but some have been reconstructed, including the home of Goethe, Frankfurt’s famous son who became Germany’s greatest writer. For shopping it is hard to beat the Zeil, Germany’s equivalent to New York’s Fifth Avenue.

With its excellent rail connections and Autobahn system, Frankfurt is the natural hub for travellers wishing to explore the surrounding towns and countryside. It is also the venue for numerous trade fairs, exhibitions and congresses, drawing about 12-million visitors a year to these events. The largest and best known is the annual International Book Fair, which is attended by thousands of publishers.

Cologne, or Köln, Germany is the fourth largest city in the country behind Berlin, Hamburg, and Munich. Located in the state of North Rhine-Westphalia, Cologne rests along the Rhine river. Initially founded by the Roman Empire, Cologne is one of Germany's oldest cities. Each year many tourists are attracted to Cologne Germany travel due to its fascinating history.

When you visit Cologne Germany you're sure to be enchanted by the blend of Romanesque churches, simple post-war buildings, and classic modern architecture. Like many of the other cities of Germany, Cologne suffered many air raids during World War II (262 in total). It was the site of the first 1,000 bomber raid by the Royal Air Force as well. As a result of such heavily focused fire, many of the old buildings were destroyed. However, efforts have been lead to reconstruct these buildings, including the twelve Romanesque churches in order to draw more to visit Cologne Germany. Many who look to Cologne Germany travel for visiting historic monuments; the majority of the classic buildings have been restored.

However, what draws most to visit Cologne Germany is its cathedral. Known as Kölner Dom, this popular landmark is the unofficial symbol for the city. Construction began in 1248 A.D., but it took over 600 years to complete this mammoth gothic church. Its twin towers are 157 meters (515 feet) tall and the church is 144 meters (472 feet) long. The cathedral is under the control of the Roman Catholic Church and is the seat of the Archbishop of Cologne. For a time it held the honor of the world's tallest structure until the Washington Monument was finished. However, the cathedral remains the tallest Gothic edifice in the world and is an essential part of Cologne Germany history.

Another piece of Cologne, Germany history that has made the city bears its namesake: Eau de Cologne. The perfumed water was first created in Cologne during the 18th century by an Italian merchant who had moved to Germany to make his fortune. Initially it was marketed as a cure-all before eventually evolving into what we commonly know cologne as today.

Adding to Cologne Germany history are its numerous museums. Of particular note is Schokoladen Museum which is dedicated solely to the process of chocolate making and includes state of the art methods. If you've got a sweet tooth, you won't want to miss it.

If you're looking for Cologne Germany travel and want take in the city from a distance, an hour tour on the Rhine is the perfect solution. You'll find plenty of these cruises between April and October.

For most of the latter part of the 20th century, Berlin has stood as a symbol of the division between East and West, split by the infamous fortified wall erected to separate the socialist sector from the democratic district. When the Berlin Wall was pulled down in 1990 the city discovered that it suddenly had two of everything, most notably two very distinct societies separated both socially and economically. The past decade has seen Berlin embracing unification and rebuilding itself as a modern European capital.

More than 100 streets have been reconnected, and signs of the Wall's existence have all but disappeared. Years of division are still reflected in the new city's architecture, however, with a modern city of skyscrapers, retail centres and urban developments in the West contrasting with most of the pre-War city that remains in the East.

For nearly 30 years the Wall sealed off the imposing Brandenburg Gate from the West, but now traffic passes through it freely. Similarly Alexanderplatz, which was one of the main centres of 1920s Berlin, and later post-war East Germany, has once again become one of the city's focal centres. The site of the infamous Check Point Charlie with its threatening monitoring tower erected to ensure no one crossed over from East to West, is now a museum, and while the tower no longer stands, visitors can see the East Side Gallery, a surviving chunk of the real Wall, now decorated by local artists.

Berlin is once again a vibrant centre for the arts, with many museums, galleries and theatres. At the Kulturforum visitors will find a number of impressive museums and concert venues from the spectacular Berliner Philharmonie concert hall to the complex's Picture Gallery, which houses a vast collection of European paintings from the 13th to 18th centuries.

Berlin still boasts a fantastic nightlife, and while tastes have changed since the height of the cabaret halls of the 1920s and 30s, there is a vast array of venues catering to all tastes. Berlin's calendar is also packed with festivals and parties from the Christopher Street Day gay and lesbian parade in June to the massive Love Parade dance party in July and the Jazz Fest Berlin in November.

The Bavarian city of Munich, centre of southern Germany, is one of the country's favourite tourist destinations, offering a unique combination of modern flair and traditional charm, all mixed together with a heavy helping of 'Gemutlichkeit', the special German term for hearty, happy, healthy togetherness.

Traditionally the city, famous for its breweries and beer halls, conjures up images of jolly red-cheeked, portly men in lederhosen, downing steins of beer. There is plenty of this fun to be had, but Munich and the Bavarian region has plenty more to recommend it to visitors. The city has numerous great museums, art treasures, hi-tech industries and gems of Gothic and Baroque architecture. It is also the gateway to the Bavarian Alps, drawing winter sports enthusiasts from near and far.

Munich itself was founded in 1158 on the River Isar, and acquired its name, Munchen (home of the monks) from its first monastery. It was the monks that started the beer brewing tradition for which the city is now world famous, particularly since it started celebrating an annual beer festival in 1810. Today close on six million people visit the Oktoberfest every year, and consume more than five and a half million litres of beer during its two-week run.

There's no universal speed limit on the Autobahn, but there are limits posted on a large number of either congested or treacherous stretches of the Autobahn. There are also speed limits in effect on the parts where pollution or traffic noise pose a special problem.

The types of roads

Bundesstraßen
National roads (like our Interstates) are called Bundesstraßen. These roads are numbered and directions are most often given by the road numbers. Signs showing this number are well posted, with black digits on a yellow rectangle sporting a black border. The number is usually referred to with a 'B' in front of it, i.e. 'B 1'. The more important the route, the lower the number.

Bypass routes are designated with an appended 'a' (for alternative) or 'n' (for new alignment). An example would be 'B 1a'.

Landesstraße and Staatsstraße
Smaller main roads are constructed and maintained by the Bundesländer (a German state) and are calledLandesstraße (country road) or Staatsstraße (state road).

Like the Bundesstraßen, these roads are numbered. They are prefixed with 'L', 'S', or 'St'. An important difference is that these numbers are not usually referenced on direction signs or road maps. The road numbers do appear on the kilometer posts by the roads, for reference and to use when needing the emergency services or the AAA.

As these road numbers are unique only within a certain Bundesland (state), you will see the same number in different parts of Germany.

If you need to find out whether your license will be valid in Germany, head over to this site for driving license validity in Germany.