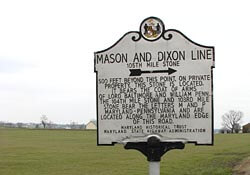 The Mason-Dixon Line is known by Americans as the separator of pro-slavery and pro-freedom states, between the South and the North. However, the line’s origin predates the United States and it has nothing to do with slavery. When the country was a part of British colonies the line was considered as a bloody dispute of land between Maryland and Pennsylvania proprietors.

The road is not shown or marked on the map but you can go and preserve “Arc Corner” on the right making a right turn on the road that passes into the “Whiteclay Creek”. A granite obelisk is seen marking the Arc Corner about five feet high to the eastern side of the road. There is a small turn-off used for parking which is located on one side of the road

From the state line less than a mile you can look for a right turn Rock Road on Chambers driving on 896 into Pennsylvania. Travel downhill 1 mile and make a right after going eastwards reaching Arc Corner road. You will find a parking place as the road will give you a path and then lead to a gravel road. You can observe the Arc Obelisk Marker after you have emerged at the paved road following the path.

On the map the “Tangent Line” which is the northernmost segment that gave so much hassle to poor M&D is also shown. It is a Maryland/Delaware border line that marked the border between Cecil County in Maryland and New Castle County in Delaware. According to colonists and kings orders were that the line was supposed to run due north creating a perfect North/West right angle touching the Arc at its westernmost part. The difference between the northwest section of Delaware and the left of the Arc Corner is marked by the Delaware “wedge” on the map. The area is great for mountain-biking, hiking and driving.

The Mason Dixon Line is 15 miles south of Philadelphia and is the modern day border between Pennsylvania in the north, and Maryland and West Virginia in the south.