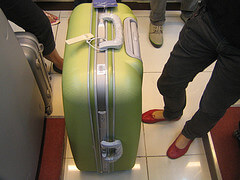 In a time far far away, before the year 2000 or so, airlines used to let you bring checked baggage for free when patronizing their airline. That time is now well and truly gone and air travelers need to get used to paying high fees or learn to travel with less stuff. Or maybe use some of our 7 ideas for bringing your stuff fee-free.

Ryanair and easyJet in Europe have been charging for checked baggage for as long as I can remember, and the American legacy carriers began doing so about 2 years ago. Right now, travelers can expect to pay from $15 for the first checked bag, if paid in advance. And doing so is a good idea, as it’s more costly if you have to check the bag once at the airport or the gate.

As fees have increased, more travelers have been lugging more bags onto the plane as carry-ons. But baggage fees are nice earners for the airlines, so they’re cracking down on this practice. In 2008, baggage fees earned airlines $1.5billion!

Pretty recently, you could bring several carry-ons with you, and while it being against policy, flight attendants and gate agents would let you rather than risk a confrontation. That leeway is now mostly gone. And if you’re trying to bring too much baggage on, you’ll not only be forced to check it, but also pay a higher fee. For example, US Airways will charge an additional $5 for the first checked bag at the airport or gate, and Irish Ryanair will hit you up for a massive $50 for your first bag...

The time for avoiding a $15 or $50 fee are numbered. A proposed new law would see to that. It gives the Transportation Security Administration (TSA) the task to limit the carry-ons travelers can bring through security checkpoints. Obviously, this piece of legislation was dreamt up in an airline boardroom rather than the Capitol.

What should you do instead to avoid fees?

If you don’t bring it, you won’t have to pay a fee for it. Keep packing to a minimum and you’ll fit everything in a carry-on for most trips. Just make sure your bag isn’t over the weight limits, as then you’ll have to check it. Get a luggage scale (or fishing scale if you have one!) to check your bag’s weight.

There are still ways to avoid paying baggage fees if you have to check luggage. US Airways lets all frequent fliers, flights to Europe or Asia, first class passengers, and military staff check luggage for free. That’s a lot of travelers. The same goes for other airlines, although rules vary. American Airlines states that only 1 in 4 passengers actually pay fees.

Southwest Airlines and JetBlue Airways don’t charge you for bringing luggage, you can even check a second bag without paying fees. The same goes for European legacy carriers like British Airways, Scandinavian Airlines, or Lufthansa.

Speaking of legacy carriers: Many flights on code shares will have differing policies, with many allowing you to check bags for free if your ticket is bought via the partner airline.

Also, if your itinerary involves 2 or more airlines, you can often check your bags through the entire way, avoiding the fees normally levied on the 2nd or 3rd leg of your itinerary.

Get someone else to pay

Some hotels are so aware that checked baggage fees are affecting peoples’ travel plans they’re offering to pay the fees for you. See if your hotel or resort will do this for you, and check away.

Send it on the mail truck

USPS, FedEx, UPS, or a service such as Luggage Forward can help you avoid fees, but of course their service costs money as well. Sometimes much more than the airline’s fee would be. If nothing else, a courier service is much less likely to lose your bags than your airline is.

Get some smarter luggage

If you’re traveling a lot, you may want to get some luggage that is exactly the maximum size for carry-ons. That way you can bring on the maximum amount of stuff in the cabin and skip the fees. Should pay for itself after a few flights.

So, that’s our 7 ways of avoiding checked baggage fees right now. In the future, there are a more permanent ways we can all get together to abolish fees altogether:

Buy your tickets only on airlines allowing at least one checked bag for free. If other airlines see that better service is rewarded with more customers, they’ll soon change their tune. Southwest and JetBlue are two airlines deserving of your custom.

I really hate fees for luggage, and I think they are totally unfair! I wish they were illegal. But oh well, thanks for the article. It's really great, and I found it very informative. Thanks for helping those of us out.

This is a very nice article, and is full of informative tips. Thanks for it!

While I seldom travel and am not in the military, therefore do not qualify for frequent flier or military exceptions, I am disabled and on a fixed income and any tips I can get on reducing baggage fees are very interesting to me. I usually use Southwest for flying up and down the Pacific coast, but I visit family in the midwest, and I think I will be buying "smarter luggage" and perhaps even sharing clothes with same-size family members rather than paying extra fees. I will continue to use Southwest whenever possible as long as they continue to offer free baggage checks.

This is an awesome article and I love the suggestions! As a disabled person on a fixed income, any tips for reducing fees for ANYTHING is great. I plan to visit my mother in Nebraska (from California) next year and I have to travel with at least two suitcases (one for clothing and one for medical supplies) and I was not looking forward to having to baggage fees. I'm thinking maybe this time I'll take the one for clothing, and just buy my medical supplies when I get there. It'll probably be cheaper!