Located less than two miles from the ancient city of Chichen Itza, Cenote Sagrado ("Sacred Well") is a stunning natural well that attracts thousand of tourists every year. The Cenote is also known as “Chen Ku”, Chen Ku being the original name that the Mayans used for the cenote. It is a natural formation, formed over thousands as a cave created through limestone collapsed and formed the well filled with forty feet of water. The well is approximately 60 meters in diameter, and the water table is a full 27 meters below the surface, and the Cenote is nearly perfectly round. There is also a small steam bath located on one end.

Cenote Sagrado was an important site to the Mayans of Chichen Itza. Archeologists have found gold, jewelry, jade, figurines, and other treasures sacrificed to the Gods. They also found extensive evidence of human sacrifice. Those sacrificed included men, women, and children, all apparently offered to the gods in times of drought. Those who survived being thrown into the well were said to have powers of prophecy. 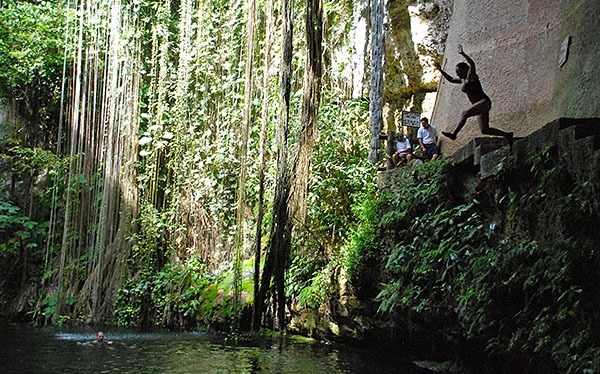 The site itself is friendly to families. There are stairs that make the cenote accessible. There is an onsite restaurant. It is an excellent spot to enjoy an afternoon cooling off. You can swim and enjoy the stunning water and limestone. The site offers the opportunity for both physical and visual appreciation. There is taxi service available from Chichen Itza, making it accessible if you are not traveling with a tour group.

The Cenote Sagrado is located in the same area as Chichen Itza, near the Valladolid - Merida highway (Mexico 180). You can visit during the same hours as Chichen Itza is open.

The Mayan city of Chichen Itza, Mexico
The Burning Devil Festival in Guatemala
Crystal Cave of the Giants, Mexico