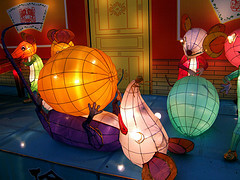 The "summer moon festival" is one of the important festivals in the Chinese traditional calendar. Actually celebrated in autumn (the 15th day in the 8th month of the traditional Chinese moon calendar), it is the balancing counterpart of the Chinese new year (celebrated in February), when the country takes a collective vacation. Not everything is closed during the moon festival, however. This is a time of celebrating with friends, rather than worshipping ancestors.

Originally the Moon Festival, or in Chinese the Zhongqiu Festival, Zhongqiujie was a harvest festival, to celebrate brining in the summers harvest. Today, it is still an important event in the countryside, but in the cities it has turned into a generic celebration.

The moon festival is also the festival of lanterns in China, when people gather together to look at the illuminations - today, people light up lanterns, and cities and wards compete against each other in creating the most dazzling illuminations. Floating lanterns, really hot-air balloons of paper which are lit up by the candle inside, also belong to this festival. 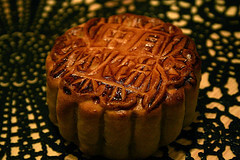 People gather in restaurants, tea houses, and at each others homes to watch the illuminations, drink tea, and eat moon cakes. This is a special kind of cake, made from a crusty dough with ground bean paste inside, that is also a popular present at festival time. According to one of the many stories and legends surrounding the origin of the festival, it started as a revolt against the mongol rule during the 15th century. Since the mongols did not eat moon cakes, the crafty rebels distributed messages in them - and coordinated the rebellion.

However true, this years moon festival will surely be celebrated by eating moon cakes, all over Beijing and the rest of China.