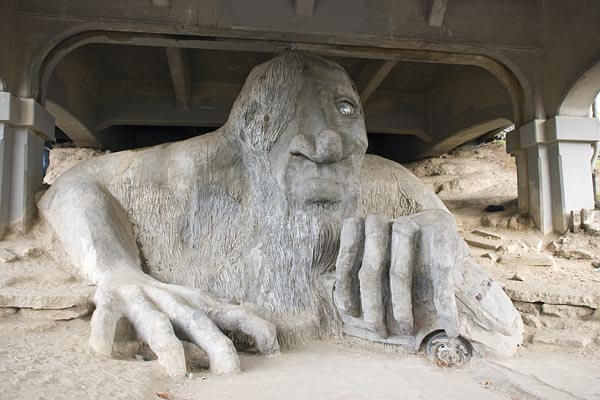 The Fremont Troll lives under a bridge in Seattle, Washington. He apparently likes Volkswagens because he clutches one in his hand! His hubcap eye keeps watch over the neighborhood. His other eye is covered by his hair. You might think he would be scary (he is 18 feet high and hides under a bridge), but people flock to see him. He doesn’t seem to mind being gawked at, and many lively conversations take place all around him. How many other trolls do you know of that would let people pick their nose, climb all over them and take photos of them? There is no cost to see him, and he is available to listen every day of the year.

The Troll is a concrete, steel rebar and wire sculpture, made by four local artisans. Once a year, on October 31st, the troll hosts an artistic party called Trollaween. He gets the party started, then sends people down the street to see the rest of the art pieces and installations.

The Fremont Troll is hiding at