The ghost town of Kayaköy, Turkey 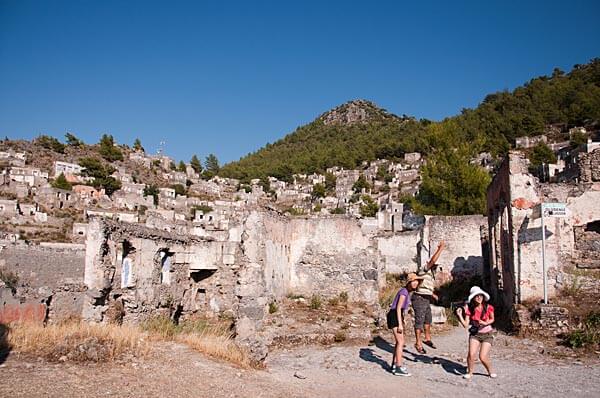 It is a very interesting experience to visit the strangely eerie Ghost Town of Kayaköy, Turkey. This is a ghost town as it was deserted by its inhabitants, rather than because of some supernatural intervention, nevertheless as you walk around the buildings you do get a feeling of the past and can easily visualize the inhabitants living and working in what was once a thriving town.

This somewhat windswept and remote place had around two thousand people but it became deserted in 1923, when the mainly Greek population was returned to their home country as a result of a government population exchange. As you walk around the town, which is now an open air museum, you will see over five hundred houses, many of which are mainly intact apart from their roofs. These remain well preserved monuments of the town’s history. You will pass schools and think of the ongoing generations who grew up in the town. There are also two churches which are of historic importance; these are Taxiarkis which is up hill and Katoponagia which nestles in the valley.

As you explore you will reflect that the town dates back to the beginning of the eighteenth century and has been damaged twice, once by an earthquake, around 1850, and by a large fire later in the same century. You will feel that the town will endure and this seems to be confirmed as you notice that a very small number of the buildings have been restored and are again lived in.

Overall, the town provides a picture of the past as there are no modern buildings to detract from this. Make sure you allow plenty of time for your visit as there is so much to see.

The ghost town of Ruby, Arizona
Europeans go to Cyprus and Turkey for sun this summer
Meteora is on my destination wish list
The Knowlton Church ruins and earthworks in Dorset
Experience Music Project, Seattle