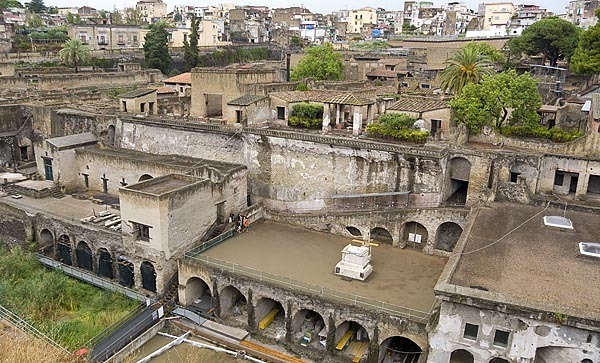 When the volcanic eruption buried Pompeii in 79 AD, the cloud of ash and gas also took several other cities with it. The shore of the Gulf of Naples south of the city was home to the villas of rich Romans (the wife of emperor Nero had a villa here, also buried).

While Pompeii was preserved by the ash, which created impressions of people (and their dogs) so vivid that you can see their facial expressions, the smaller city of Herculeanum was buried not in a rain of ash, but in mud and lava. Most of the people had already fled, but their houses - and everything in them - were wonderfully preserved under a hard lid of stone and ash. 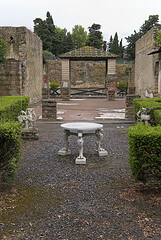 The excavations at Ercolano (the modern day city) started already in 1738, and created a wave of fashion and interest in the Roman times, which in turn became the neoclassical movement in Europe. Kings and other famous travellers flocked to the excavations as part of the grand tour of Europe, while taking in the other wonders of the gulf of Naples, such as the Amalfi coast and the island of Capri. But even so, excavations are not finished, the archaeologists having left something for future generations.

Today, the site of the Herculeanum excavations is a time capsule of roman times. Easily accessible from Naples with the Circumvesuviana train, about 20 minutes in the direction of Sorrento (get off at Ercolano, follow the signs that says Scavi), the villas of the Romans are preserved. The perishable artifacts, including the incredible library found in the "house of the philosophers" where several hundred philosophy books written on papyrus were excavated, have been brought to the national archeological museum in Naples (closed tuesdays). But the houses still stand in the little archeological enclosure, and the paintings on the walls give a vivid picture of what life must have been like in the Roman times.

Tickets are 11 Euro, or you can buy the Artecard at a Campania tourist office, which gives free entry to all museums during the duration of the card, plus free travel on all local transportation.