Originally a cavalry barracks, the lovely pink building that now houses the National Archaeological Museum in Naples, Italy, sits in a corner of what was once the wall of the Greek city of Neapolis. Dating back to the Seventeenth Century, it was the seat of the University of Naples until 1777 when King Ferdinand IV ordered the architect Fernando Fuga to modify it to house the Bourbon Museum and Royal Library. Over the next few hundred years, the museum received collections of antiquities from all over Italy, both from private collectors and from various excavations. The National Museum came into being in 1850 with the unification of Italy.

Currently, the museum houses an extensive collection of Greek and Roman artifacts, the principal among which are the Farnese Collection of engraved gems and the Farnese Marble sculptures. Additionally, there are treasures on display which have been removed from the tragedy that occurred during the volcanic explosion of Mount Vesuvius and buried the cities of Pompeii and Herculaneum, killing 25,000 inhabitants. There are delightful mosaics and beautiful frescoes that have been remarkably well-preserved. 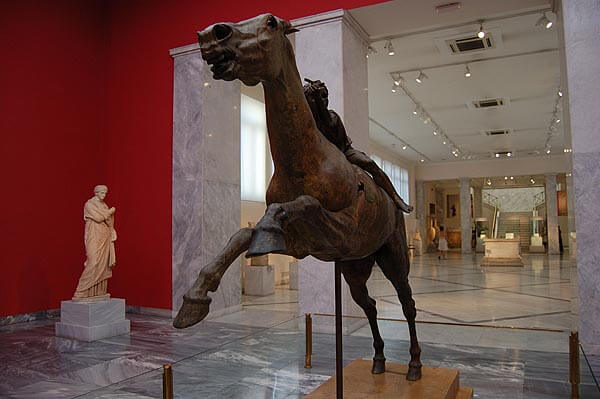 The museum, which is located in the Piazza Museo, can be visited daily from 9 am to 7 pm, although for those visitors who are already in the building, the museum stays open until 8 pm. It is closed Tuesdays and is not open on Christmas Day, December 25.

Photos by Armando Mancini (1) and Basilicata Travel (2) on flickr