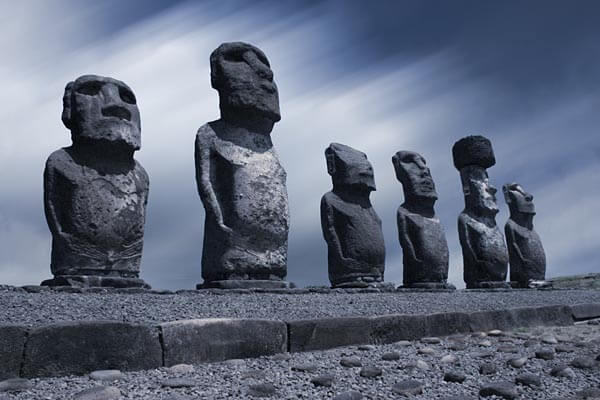 Easter Island is a Polynesian island located in the southeastern Pacific Ocean. A tourist visiting Easter Island can view the Moai. The Moai are monolithic human figures which were carved between 1250 A.D. and 1500 A.D. About half of the Moai are at the main quarry at Rano Raraku.

The Rapa Nui people, a stone age culture, made these statues to represent deceased ancestors. The statues face inland, supposedly gazing across their clan. Later during conflicts they would be cast downward to symbolize the defeat of the Rapa Nui tribe that ended up on the losing side of the conflict.

There were 887 statues carved and moved. This is considered to have been quite a feat. The tallest statue is called Paro and is about 33 feet tall and weighs 75 “tonnes” which is the same as 75 US tons. The statue of Ahu Tongariki is shorter and squat but weighs in at 86 tons. There is incomplete statue that if finished would have been 69 feet tall and 270 tons.

The characteristic of the statues vary. William Mulloy, an American archaeologist started and investigation into the production, transportation and erection the Moai. He also started a physical restoration in 1960 of some of the statues and in 1974 the ceremonial village at Orongo.

In 1979 a team of archaeologist discovered that the deep elliptical eye sockets were designed to hold coral eyes. Some of the statues have “pukao” on their heads which was topknots and headdresses. These were carved out of a very light rock called red scoria. In the beginning the Moai were polished to be smoothed with pumice but since has eroded.

In 1994 the Moai were includes in a list of UNESCO World Heritage sites. It is a crime to destroy or mutilate any of the statues but in 2008 a Finnish tourist chipped a piece of ear off one of the Moai. The tourist was fined $17,000 in damages and is banned from the island for three years.

Thanks for the info! I used this for a school project, and I feel much more confident that I will do well now.

Good point, I neglected to mention that the statues were made by the Rapa Nui tribes. Updated the article accordingly

who made the easter island statues