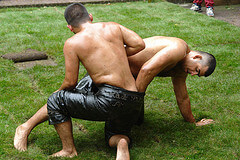 Are you in the mood to go slip, slip, sliding away for a vacation. Consider this, from June 30 to July 6 you can enjoy the annual Kirkpinar Oil Wrestling Championship at Edimine stadium. The annual event takes place at the stadium that is on the Greek-Turkish border.

Those brave souls who compete in this “sudden death” style of wrestling are clad only in short leather trousers made of water buffalo leather and a good bit of olive oil. The competitors are paired off and try to gain a good grip on their opponent. They try to flip each other over and pin them to the ground. The object is to be the last wrestler standing. This champion then becomes a national celebrity.

This sport is over five centuries old and in the past was a means of training the troops, but it is now a popular spectator sport.

The oil wrestling is part of a 7-day festival that attracts people from Turkey, the Middle East and Eastern Europe as well as foreign tourists. Outside the wrestling arena there is a colorful fair that has the sights and sounds of a Bohemian way of living, lamb roasts and belly dancers.

I have heard over mud wrestling and and seen women oil wrestle but never knew that they had a sport for men to do oil wrestling. And to think the winner then becomes a national celebrity.