If you've ever been interested in seeing moose (known as 'elk' in Europe) up close and personal I recommend a visit to the Långshyttan Moose Park. Here, you get to meet these majestic animals so close up that you can pet them, which apparently comes as a definite surprise for most visitors. 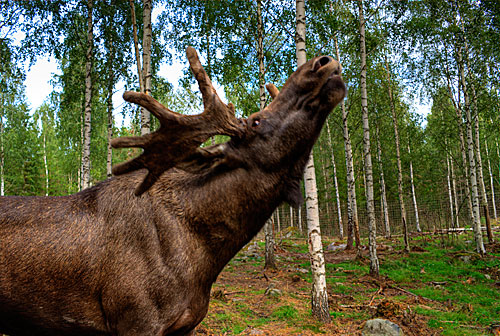 Moose are usually quite shy animals, and you usually see them at some distance. They're also quite large, standing 6-7 ft at the shoulder and weighing up to 1,580 lbs for an adult male. Elvis, the male you see above, isn't quite that heavy, at least not yet, but is probably a solid 1,000 lbs or so. Having him come up to you next to the fencing is thrilling, as he'll tower over you. 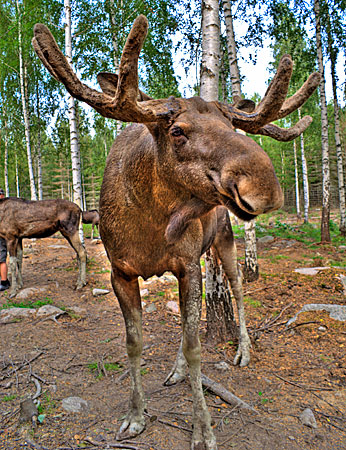 Of course, as you'll see the owner feed him bananas most likely, he doesn't seem quite as dangerous anymore. You might get to feed the calf and female with fresh twigs.

The Moose Park is well worth a visit, especially if you have kids. It's fun in either case, and probably one of the few opportunities anyone has to actually pet a moose's nose too. They're perfectly safe animals, as long as you don't get them drunk! See the clip below.

Långshyttan is located 14 miles outside of the town of Hedemora in Southern Dalarna, Sweden. To drive from Stockholm takes about 2 hours. You'll need a rental car or find a friend with a car to visit, as the park is located in the forest outside of Långshyttan.

Children in a Swedish school are still terrified after a drunk elk terrorized them during school hours.

The elk has been wondering around the southern Sweden school for days. School officials contacted police who may have to shoot the 1,000-pound animal. Officials said the elk probably ate fermented apples and became inebriated.

School officials described the elk's behavior as "completely mad." One school receptionist said the children were very scared after their encounter with the elk.

Caiman said, "If it doesn't start taking it easy we'll eventually have to put it down."